A Look Back At That First Week Of Navy Boot Camp 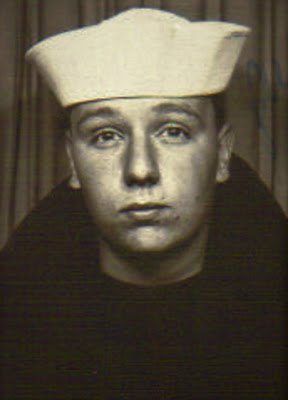 I had a talk with my 15-year-old grandson the other day.

I suggested he consider going into the U.S. Navy when he graduated from high school.

But, as I’m not a Navy recruiter, I didn’t lie to him.

I told him that there will be hardships, chickenshit orders, shitty jobs, goofy officers, cranky chiefs, narrow-minded petty officers, close living quarters onboard ship, and long periods at sea.

But I also told him some of my “sea stories” about the fun and adventures I had while serving four years in the Navy.

From “Yankee Station” in the Gulf of Tonkin off the coast of North Vietnam to the Irish Sea off of Scotland, I saw and did things that were amazing and unforgettable.

And I told him about Japan, the Philippines, Hong Kong, Hawaii, San Diego, Mexico, and the other places I visited while serving aboard the aircraft carrier USS Kitty Hawk during the Vietnam War.

And I told him about my time on the Navy harbor tugboat USS Saugus at the nuclear submarine base at Holy Loch, Scotland. During those two years, I traveled extensively across Scotland, England, Wales, Northern Ireland, and Ireland. I also traveled to Continental Europe and saw Italy, Spain, and France.

Like the old Navy advertisement promised, I joined the Navy and saw the world.

And I met exotic girls in every port. (I emphasized that point to my teenage grandson).

I also told my grandson about Boot Camp.

Those three months of basic training that most Navy veterans would like to forget.

But I recall vividly my first week at the Navy Recruit Training Center at Great Lakes, Illinois.

After being sworn in and accepting the oath to defend the Constitution in February of 1970, I had taken a train from Philadelphia to Chicago with other recruits.

In Chicago we transferred to a bus that took us to the Navy base, arriving late in the evening.

It was bitter, bone-chilling cold as we stepped off of the bus.

We were greeted by a wild man drill instructor whose name I forget. But I certainly have not forgotten him. The 1st Class Petty Officer had a pronounced rural Southern accent and he screamed at us and herded us into the barracks like we were cattle.

The barracks, built in WWII, was decrepit and dreary. And very cold.

The two-tier bunks, called racks, appeared to be even older than the barracks. We were surprised, and some were horrified, to discover that the toilets in the “head” were situated side by side without panels separating them.

Three months of this?

He had us line up in front of our assigned racks. He informed us that we were in a temporary barracks and in one week we would be “crossing the river” to our new barracks.

So we settled in.

We spent that first week marching, running, doing calisthenics and doing extreme exercises with a 12-pound M-1 rifle. As punishment for infractions, the recruit offender had to extend his arms outward and hold the rifle horizontally at shoulder’s length.

Sounds easy? Try it for a half-hour, as I did on several occasions.

I hated the company commander, as we all did, even though as the son of a former Navy chief, and a voracious reader about the Navy and the military, I knew that this was a proven effort meant to create military discipline and teamwork. Still, I thought the company commander went way overboard, and he appeared to truly enjoy torturing the recruits.

At the end of that long first week, the drill instructor told us to go to chow.

“I don’t care if you just drink a glass of chocolate milk, I want you back here in fifteen minutes at 1300,” he screamed, his face red and distorted, saliva spitting out from his rubbery libs. “I want to see you in full uniform at parade rest with your sea bag in front of your rack ready to march across the river.”

We quickly gobbled some food and then rushed back to the barracks. “Full uniform” meant a Navy-blue wool watch cap, a navy-blue wool turtleneck sweater under our dungaree shirt, bell bottom dungaree pants, “boon docker” boots, and a heavy, double-breasted Navy-blue peacoat.

After about a moment or two of standing at parade rest, our arms folded behind our backs, legs akimbo, we discovered that the insane instructor had raised the heat up in the barracks.

The barracks was like the proverbial oven and with our layered clothes, the sweat poured off of us. The barracks had a wall clock and out of the corner of our eyes we watched time tick on slowly as we remained at parade rest. No one moved, as we were terrified that the instructor would sneak in and catch us off guard.

It was not until 1400 (two o’clock) that the grinning and prancing instructor sweep into the barracks. He appeared to enjoy seeing our discomfort.

“I got some bad news for some of y’all,” the company commander announced to the sweat-soaked and weary recruits. “We are splitting the company up. Some you pussies will not have the pleasure of serving in my company.”

He explained that those he called out would be transferred to another company under another commander.

“When you hear your name, fall out.”

After the fourth name was called, I heard my name.

The instructor was on me in a flash. His twisted face, which no doubt housed a twisted mind, came within an inch of my own.

“Well, at least you’re fucking honest. Get the fuck out!”

I joined the other recruits outside of the barracks and we met our new company commander. He was no sweetheart, to be sure, but he was certainly less manic than the one inside the barracks.

The new company commander lined us up and marched us across the mythical “river’ that separated the old base from the new. “Across the river” was often mentioned that first week and we were all taken aback to discover a body of water more accurately described as a small creek than a river.

And the bridge across the water looked like the kind of “bridge” one would see at a miniature golf course.

Thankfully, the new barracks we moved into were recently constructed and we felt much more comfortable.

Some weeks later, I ran into a recruit who stayed with the first company commander, and he told me several horror stories about the demented drill instructor.

Although I found Boot Camp to be challenging, it would have been far worst had I stayed in the original company.

After Boot Camp, I told my grandson, newly promoted seaman apprentices move on to the fleet and to adventures that the sailors will remember for the rest of their lives.

Note: The above photo is of me at Boot Camp. Don’t I look happy?

The below photo is of me (third from the left) as we prepared to leave Boot Camp. 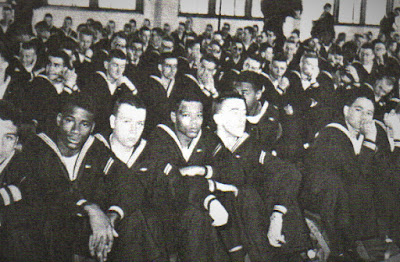 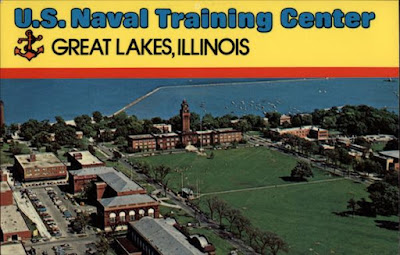 You can also read my other vignettes, short stories and humor pieces about my time in the U.S. Navy via the below link: