My Crime Beat Column: In the Shadow of the Master, Classic Edgar Allan Poe Tales and Essays From Today's Leading Crime Writers 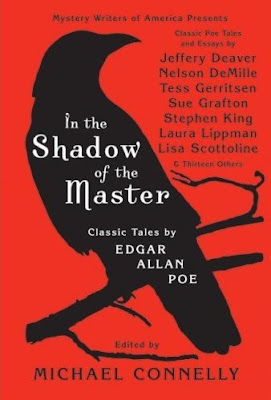 I’ve been a student of crime since I was a 12-year-old aspiring writer growing up in South Philadelphia in the 1960s.

Poe’s bicentennial celebration was this past January — he was born on January 19, 1809 — and to honor the inventor of the detective story and the master of mystery and the macabre, the Mystery Writers of America put together an anthology of Poe’s classic work intermingled with essays written by today’s leading crime and mystery writers.

Since their inception in 1945 the Mystery Writers of America, an organization for mystery writers and other professionals dedicated to the field of crime writing, have held Poe up to be their symbol of excellence. Their annual award for the best mystery and crime novel, TV program, film and other categories, is a bust of Poe called the Edgar.

Edited by Michael Connelly, In the Shadow of the Master (William Morrow) contains some of my favorite Poe stories, including The Tell-Tale Heart and The Murders in the Rue Morgue.

“Gathered here with his most notable works are the long and short thoughts of those who followed Poe — the writers who directly or not so directly have taken inspiration from him,” Connelly wrote in the introduction.

“The idea is simple. This is a birthday party,” Connelly explained. “The twenty guests invited here by the Mystery Writers of America have come to honor Edgar Allen Poe on his two hundredth birthday. We celebrate his work, and we celebrate all that his work has wrought.”

Poe was the mad genius who started it all in the genre of mystery fiction, Connelly tells us, and he goes on to state that Poe’s influence in other genres and fields of entertainment –- from poetry to music to film –- is incalculable.

Connelly notes that the bestseller lists, movie charts, and TV ratings are today dominated by the mystery genre and its many offshoots.

Connelly’s essay in the book recounts how he was spooked by what he initially believed was a gun shot and scream outside his hotel room as he was reading Poe’s morose and haunting work. He came to realize the noise was only the slamming of another hotel room door, and that he had come under the spell of Poe.

Connelly recreated the scene in his crime novel The Poet. The novel is a grisly homage to Poe, as the serial killer character leaves phrases from Poe’s poetry and prose at the murder scenes.

The Poet is a good thriller and Connelly will soon release a continuation novel called The Scarecrow. I look forward to reading it, and writing about it here in a future column.

In horror master Stephen King’s essay he tells us that he is often asked what scares him, and he replies that almost everything scares him, from express elevators to very tall buildings to the idea of a zealot loose in one of the great cities of the world. But when asked what works of fiction scared him, he replies William Golding’s Lord of the Flies and Poe’s The Tell-Tale Heart.

“Most people know that Poe invented the modern detective story (Conan Doyle’s Sherlock Holmes is in many ways the same detective as Poe’s C. Auguste Dupin), but few are aware that he also created the first work of criminal sociopathy in The Tell-Tale Heart, a story originally published in 1843,” King wrote.

“Many great writers of the twentieth century, from Jim Thompson and John D. McDonald to Thomas Harris (who in Hannibal Lecter may have created the greatest sociopath of them all), are the children of Poe.”

Nelson DeMille recalls the B-movies based on Poe’s stories that our generation grew up on, Lisa Scottoline confesses that she only read Poe after winning an Edgar, and then found the stories to be compelling, especially William Wilson, and Joseph Wambaugh offers a clever parody of Poe’s poem The Raven, called Rantin' and Ravin'.

T. Jefferson Parker recalls reading Poe as a child and how some of the stories unsettled him.

“What they taught me was this: there is darkness in the hearts of men; there are consequences of that darkness; those consequences will crash down upon us here in this life,” Parker wrote.

“They taught me that words can be beautiful and mysterious and full of truth.”

I enjoyed reading the essays and rereading Poe, although I fear that, like Michael Connelly, I’ll hear a gunshot and scream outside my bedroom door tonight.

My gun will be under my pillow.
Posted by Paul Davis at 3:52 PM

Labels: Edgar Allan Poe, In the Shadow of the Master, Michael Connelly, My Crime Beat column, Mystery Writers of America