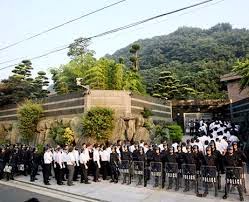 Julian Ryall at the British newspaper the Telegraph offers a piece on the arrest of a Japanese organized crime leader.

Japanese police have carried out the very public arrest of the head of the Kudo-kai yakuza gang, one of the country's most violent underworld groups.


Watched by hundreds of reporters, including television crews in helicopters hovering overhead, police officers in full riot gear and helmets entered the luxurious home of Satoru Nomura in the city of Kitakyushu, southern Japan.
Shielded by an umbrella before being bundled into the back of an unmarked police van, 67-year-old Nomura was taken into custody on Thursday on suspicion of shooting dead the leader of a local fisheries cooperative in 1998.
Nomura allegedly killed Kunihiro Kajiwara after he refused to assist the Kudo-kai's efforts to make money from a public works project at a nearby port.
The most powerful underworld group in northern Kyushu, the Kudo-kai has a hard core of around 600 active members and a reputation for being swift to resort to violence.