My Crime Beat Column: Quantum of Solace and Ian Fleming's Other Short Stories 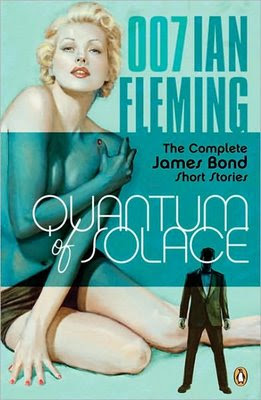 "Bond,” said the dark, cruelly handsome man in a tuxedo as he lit a cigarette languidly. “James Bond.”

And so film-viewers in 1963 were introduced to the suave yet rugged fictional British secret agent James Bond. Portraying Bond in the film Dr No was a young Scottish actor named Sean Connery.

Dr No and the subsequent Connery-Bond films in the 1960’s inspired millions of film-viewers to go on and read Ian Fleming’s thrillers.

I was one of them.

According to a recent Conde Nast survey, since the first Fleming thriller, Casino Royale was published in 1953, Bond has generated nearly $14 billion from the books, movies and video games. Bond is the world’s most enduring, and profitable, fictional character.

I recently watched the latest Bond film, Quantum of Solace again on DVD. Although I was pleased that the film producers made a thriller rather than a silly, action-comedy, I have to give the film a mixed review.

It’s a well-made film, but it lacked character and Ian Fleming’s classic trademarks. Daniel Craig is fine, although he does not look like Fleming’s Bond. I would have casted Clive Owen in the role.

The title of the film baffled many viewers. The title comes from a Fleming short story and the film makers took the title but chose to write an original screenplay for the film.

After viewing the film I picked up my copy of Quantum of Solace: The Complete James Bond Short Stories (Penguin Books) and reread the story.

One short story, 007 in New York, appeared in Thrilling Cities, Fleming’s 1963 collection of travel pieces he wrote in 1959 and 1960 for the London Sunday Times.

According to Ben Macintyre, a columnist for the Times of London and the author of For Your Eyes Only: Ian Fleming and James Bond, Fleming’s short story Quantum of Solace is the strangest of all his James Bond stories.

“In place of the traditional Bond fare of spying, violence, women and dry martinis,” Macintyre wrote in his column, “Fleming served up a profound reflection on longing, marriage, society and passion. The “quantum of solace” to which the title refers is, bizarrely, a mathematical measurement of love.”

The story is set in the Bahamas after Bond has completed an assignment. Bond attends a dinner party where he finds the people boring. Bond has an after-dinner drink with his host who goes on to tell him a story about a failed marriage.

Macintyre wrote that the short story was Fleming’s attempt to write a more serious story in the manner of Somerset Maugham, but it was also a reflection on his own turbulent marriage.

From a View to a Kill

For Your Eyes Only

The Property of a Lady

Some of the story titles may sound familiar as the film producers cherry-picked titles, characters, and plots from the short stories for the film series.

Bond in the short stories, as well as the novels, is more human, less promiscuous and less flippant than the film character. Bond is an extraordinary character in the stories and he encounters extraordinary people and lives through extraordinary events, but he is not Superman or a cartoon character.

Fleming wanted Bond to simply be a blunt instrument in the hands of the government and let the action of the book carry him along, but Fleming also infused Bond with his own ”quirks and characteristics.”

“Fleming was able to peer beyond the Cold War limitations of mere spy fiction and to anticipate the emerging milieu of the Colombian cartels, Osama bin Laden and, indeed, the Russian Mafia, as well as the nightmarish idea that some such fanatical freelance megalomaniac would eventually collar some weapon-grade plutonium,” Christopher Hitchens wrote.

Ian Fleming (1908-1964) was a British naval intelligence officer in WWII and a journalist before and after the war. He often told friends that he was going to write “the spy story to end all spy stories.” And he did.

Raymond Chandler, perhaps our greatest crime writer, was a friend of Fleming’s and a fan of Bond.

So if you only know James Bond from the movies, you might want to read the short stories and then move on to Ian Fleming’s novels.
Posted by Paul Davis at 11:55 AM