My Crime Beat Column: The Vietnam Spy Who Betrayed Us 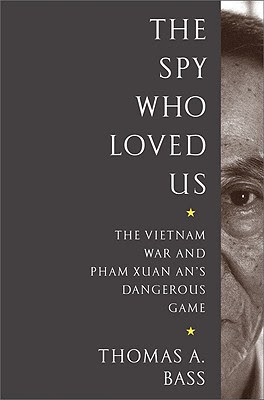 While serving as an 18-year-old sailor aboard an aircraft carrier during the Vietnam War, I witnessed a bevy of journalists coming aboard as the warship was anchored in Da Nang Harbor in South Vietnam.

I worked in the USS Kitty Hawk's radio communications division and we were told to keep the journalists clear of our top secret areas. As I planned to major in journalism in college after leaving the Navy, I was interested in our visitors from the major newspapers and TV networks..

I don’t recall Pham Xuan An, a TIME correspondent at the time, being one of the journalists who came aboard that day. Which was good – as we later discovered that An was a spy for the Viet Cong and the North Vietnamese communists.

In the annals of modern espionage, Pham Xuan An (1927-2006) ranks as a top spy. During the Vietnam War, An befriended, guided and advised journalists and American and South Vietnamese military and government officials. He obtained vital intelligence from his many “friends” and passed it on to the Viet Cong and the North Vietnamese. 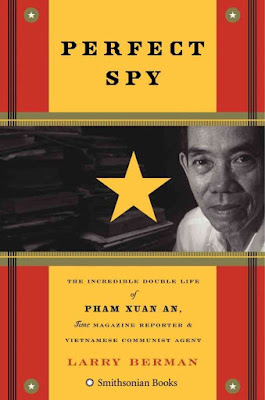 Larry Berman, a professor of political science at the University of California who opposed American involvement in Vietnam, was chosen by An to be his American biographer. Berman interviewed An in Vietnam before the spy died. His book is called Perfect Spy: The Incredible Double Life of  Pham Xuan An, TIME Magazine Reporter and Vietnamese Communist Agent.

This book is a gushing, loving and uncritical view of the spy. It ought to be called Perfect Spy, Prefect Fools. Like many of the reporters An befriended during the war, Berman’s left-wing, anti-war views cloud his judgment of An.

An was by all accounts a likable, earnest, humble and helpful friend to all those he came into contact with. Just like any good con artist - or spy.

A spy since 1952, An was sent to study journalism in the United States as part of his training and cover story - or "legend," as they say in the trade. With his American friends and his insights into all things Vietnamese, An took jobs with Reuters, the Christian Science Monitor and then TIME. For the elite of the American press corps, An was the go-to-guy.

An's critical intelligence aided the communists throughout the war, especially during two key battles: the 1963 assault on Ap Bac and the 1968 Tet Offensive. Countless South Vietnamese and American soldiers died in these bloody battles thanks in large part to An.

Even today An's journalist friends refuse to believe that he misled, used or betrayed them. "Who in our egotistical trade would admit to being a dupe, conscious or otherwise?" veteran journalist and author Joseph C. Goulden wrote in his review of Berman's book in the Washington Times.

Goulden also noted that Arnaud de Borchgrave, a Newsweek correspondent during the war, disagreed with his colleagues and accused An of spreading disinformation to American officials and journalists.

Thomas Bass' The Spy Who Loved Us: The Vietnam War and Pham Xuan An's Dangerous Game is a bit more balanced than Perfect Spy.

Like Berman, Bass interviewed An in Vietnam before the spy died. Bass writes that when An was working for Reuters in the 1960s: "He was the irrepressible man about town who knew everything and everybody and was seen everywhere, in all the city's best restaurants and cafes, chatting and joking with everyone from generals and ambassadors down to the local cyclo drivers and dance hall girls. An established himself as the go-to-man for newly arrived Americans who needed a tip. He was always generous with his advice and stories, always a good source of local color. The news reports filed out of Vietnam that started with an anecdote provided by An must number in the thousands."

Bass notes that although An rarely claimed to have done anything more during the war than observe and analyze events, there were times that he "reached behind the curtain to adjust the scene."

One example was the battle of Ap Bac in 1963, where the Viet Cong at battalion strength defeated the South Vietnamese, who were supported by American air and artillery. Bass writes that two Viet Cong soldiers received the North Vietnamese Military Exploit medals for the victorious battle. One was the commander of the communist forces. The other was An, who devised the winning strategy.

An also helped plan the Tet Offensive in 1968, in which eighty thousand communists troops simultaneously attacked targets in South Vietnam. The communists briefly held the city of Hue, but the popular uprising planned on didn't happen and the overall attack was a military defeat.

Bass notes that the communists lost more than half of their troops in the south and perhaps a quarter of the North Vietnamese Army forces from the north.

"The offensive destroyed the Viet Cong as a fighting force," An admitted to Bass. "Then the United States introduced the Phoenix Program, which was extremely effective in assassinating thousands of Vietnamese communists and neutralising the operation in the south."

But despite the military failure, Tet was considered to be a success for the communists, as the fighting viewed on TV and the negative reports by anti-war journalists eroded the American public's confidence in the war. Tet provided the communists with a major psychological victory.

“We are now in the United States’ War Room!” Giap and Minh are reported to have said, rubbing their hands with glee.

That An was a good spy should not be surprising, as we helped train him. Prior to traveling to America to study journalism, An worked for the legendary intelligence officer General Edward Lansdale. Lansdale, an Air Force officer attached to the CIA, was an expert on counterinsurgency and was one of the most knowledgeable Americans about Vietnam. Lansdale and his crack team instructed An in psychological warfare and intelligence tradecraft.

An went on to betray Lansdale and many other American and Vietnamese friends. An also betrayed his journalist colleagues, yet many of them continue to admire him.

“I began to suspect that I had fallen into the same trap as An’s former colleagues,” Bass wrote in his book. “They had swapped ignorance for willful ignorance and remained charmed to the end by An’s smiling presence.”

Not all of An's colleagues felt that way. Beverly Ann Deepe, a reporter with the New York Herald Tribune, was angered at An's betrayal and Murray Cant, the chief correspondent for TIME, called An an SOB and said he'd like to kill him.

Zalin Grant, a former U.S. Army intelligence officer, journalist and author of Over the Beach: The Air War in Vietnam and Facing the Phoenix: The CIA and the Political Defeat of the Untied States in Vietnam, wrote that he thought An was a communist hero, but not an American hero.

When an excerpt from Bass' book appeared in The New Yorker in 2005 and quoted journalists singing An's praises, Grant wrote a letter to the magazine editor.

"It was one thing to have been against the Vietnam War - many of us were," Grant wrote. "But quite another to express unconditional admiration for a man who spent a large part of his life pretending to be a journalist while helping to kill Americans."

In his Washington Times review of Berman's book on An, Goulden wrote that a thought kept crossing his mind as he read the book.

"Would the journalists who now praise An as a patriot be equally forgiving of a colleague who turned out to be working for the CIA at the same time he was reporting on the war?" Goulden asks. "Think about it," he added.

Note: The above column originally appeared at GreatHistory.com.
Posted by Paul Davis at 12:03 PM