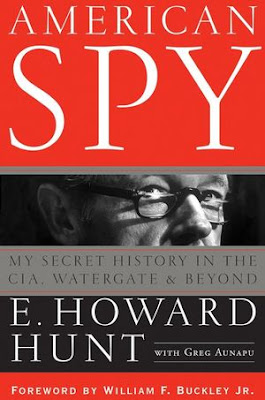 "I've been called many things since the foiled break-in of the Democratic National Committee headquarters at the Watergate complex, including a criminal mastermind, a bungling burglar, and even a bad spy novelist," E. Howard Hunt wrote in the introduction to his book American Spy: My Secret History in the CIA, Watergate & Beyond (Wiley).

"I don't know which accusation hurts most," Hunt continued. "Two are outrageous overstatements and one is a mater of opinion. Need I explain which is which? Whatever the case, none of them describes the whole man, and all disregard over two decades of service to the United States, first as a sailor in World War II, then as an OSS (Office of Strategic Services) operative, segueing into many years as a CIA agent."

Hunt lead an interesting life before, during and after the Watergate incident. His book reads like a thriller when he tells of his stint in the Navy in World War II and his time in the OSS and the CIA, which is not surprising, considering that as a sideline to his CIA career, he was a prolific writer of spy and crime thrillers.

Hunt writes about his involvement in the CIA-engineered coup in Guatemala in 1954 and the less successful Bay of Pigs invasion of Cuba in 1961. He also disputes the allegations by conspiracy-buffs that he was involved in the assassination of President Kennedy.

After he retired from the CIA he went to work for the Nixon White House as a member of the "Plumbers" team. The team was tasked with stopping the many leaks to the press and performing a number of political dirty tricks.

Hunt spends a good portion of the book describing his role in the Watergate break-in. He tells what led up to it, how they planned it, what happened when they were discovered and the aftermath.

Although Hunt was a war veteran and a long-serving government employee who had never been convicted of a crime, he was slammed hard. His wife died in a plane crash at the time, so sending hunt to prison for 33 months effectively made his children orphans.

The Watergate break-in ruined a good number of lives and forced President Richard M. Nixon to resign. He too might have gone to prison had President Ford not pardoned him.

In my view, Nixon's resignation, along with the Congressional War Powers Act, emboldened the North Vietnamese to invade South Vietnam in 1975.

American combat troops were gone and the Communists knew that without Nixon, American troops would not return to Vietnam and the Americans would not mount a bombing campaign to halt the Communist invasion.

Watergate was a minor break-in that had major consequences.

Hunt is somewhat unrepentant, believing to the end that he was working for the country's good. He failed to see that neither he nor the president are above the law.

In American Spy, Hunt, who died in at 88 in 2007, described his life and offers a whole man - before, during and after Watergate.

Note: The above column originally appeared at GreatHistory.com.
Posted by Paul Davis at 3:58 PM