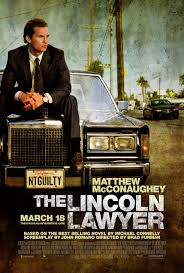 The Lincoln Lawyer is out on DVD and the film is also available On Demand on Comcast Cable TV.

I watched The Lincoln Lawyer on Comcast Cable TV last night with my wife.

We both enjoyed the film and we thought it was a very good, fast-paced and suspenseful crime thriller.

Matthew McConaughey was very good as Mickey Haller, the Los Angeles criminal defense lawyer who works out of his Lincoln Towncar rather than an office. He prefers to work out of his car, as he has to travel a good distance to five different courthouses located across Los Angeles.

The film director, Brad Furman, cast the film with a good number of fine co-stars, including Ryan Phillippe, William H.Macy and Marisa Tomei.

You can watch a trailer of the film via the below link:

I'm thankful that Furman and screenwriter John Romano were basically faithful to the Michael Connelly novel. Connelly is one of my favorite crime writers and I read and enjoyed The Lincoln Lawyer some years ago.

I interviewed Michael Connelly a while back and you can read my piece, Killers, Cops and Crime Reporters: A Q & A With Crime Writer Michael Connelly, via the below link: