My Crime Beat Column: Agents Of Treachery - A Collection Of Superb Spy Fiction 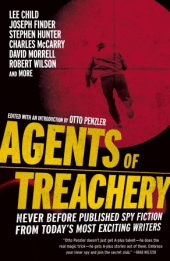 I read Ian Fleming, Len Deighton, Eric Ambler, Graham Greene, John le Carre and many other spy thriller writers. I went to the movies and saw the Sean Connery-James Bond films and I watched Patrick McGoohan on TV in Secret Agent and The Prisoner. I also liked the early Mission Impossible TV show and I loved the TV spy satire Get Smart.

I went on to do security work as a young sailor in the U.S. Navy and later as a Defense Department civilian. Over the years I met, worked and trained with, and was briefed by the sort of people I had read about and watched on the small and large screen as a teenager.

As a writer I’ve also met and interviewed a good number of retired and active duty intelligence officers and special warfare operators. Some these men and women are as extraordinary and as interesting as their fictional counterparts.

I still like a good spy story, so I was pleased to read Agents of Treachery: Never Before Published Spy Fiction From Today's Most Exciting Writers (Vintage Crime/Black Lizard), edited by Otto Penzler.

Penzler, an author, editor and owner of The Mysterious Bookshop, one of the oldest, largest and finest specialty bookstores in the country, was able to enlist 14 good writers to donate an original spy story for the book.

“The international thriller is one of the most successful literary genres in the world, its primary practitioners becoming household names, insofar as any author’s level of fame can compete with an entertainer, sports figure, or world-class criminal,” Penzler wrote in his introduction to the book.

“Ian Fleming, John le Carre, Graham Greene, Lee Child, Nelson DeMille, Frederick Forsyth, Robert Ludlum, Ken Follet, and Eric Ambler, among many others, are familiar to readers around the world,” Penzler explained. “It will come as little surprise to learn that for many years, one of every four novels sold in the United States fell into the espionage or international adventure category.”

But, Penzler added, it may come as a surprise that there has never been, until now, a collection of original stories devoted to this highly respected and challenging genre.

As Penzler noted, there have been a modest number of collections of spy stories by individual authors, such as Ian Fleming’s For Your Eyes Only, but most are reprint collections or excerpts from novels.

In Agents of Treachery, Penzler offers original short stories from the top writers of spy novels.

“The assignment given to the contributors to this unique collection was deceptively straightforward and simple,” Penzler wrote. “Write an international espionage or thriller story and set it anyplace in the world you like, in any era. No subject was forbidden, no word length specified or hindered. The wide range of styles and focus contained herein will attest to the fact that the men and women who labored over these stories and produced such masterly tales accepted the invitation in the proper spirit.”

I especially liked Charles McCarry’s story, The End of the String. McCarry is perhaps America’s best spy novelist. His Tears of Autumn is one of the best spy thrillers I’ve read.

McCarry served in the U.S. Army as a correspondent for Stars and Stripes and later worked as a newspaper reporter and speechwriter in the Eisenhower administration.

McCarry also worked as a deep cover CIA officer from 1958 to 1967. He CIA work took him to Europe, Asia and Africa. McCarry later became an editor-at-large for National Geographic and he went on to write several outstanding novels, such as Christopher's Ghosts, The Better Angels and Shelly's Heart.

In The End of the String, McCarry offers a suspenseful and atmospheric tale of the birth of a coup in an African nation. McCarry’s narrator, a man called Brown, is an American operative who is approached by the head of the national police, a man Brown simply identifies as “Benjamin.” Benjamin is about to overthrow the county’s dictator and he wants Brown to observe the coup and then report the events back to the U.S.

I also enjoyed Andrew Klavan’s clever tale of a Soviet sleeper agent from the Cold War who finds himself activated in the war on terrorism, and I enjoyed Stephen Hunter’s World War II story of espionage and behind the lines combat.

John Weisman’s Father's Day is a suspenseful story set during the Iraq War and Stella Rimington, the former head of the British Security Service MI5, provides an interesting story about a British counterintelligence operation.

There are other fine stories in this collection as well.

So if you like a good spy story, I suggest you read Agents of Treachery.
Posted by Paul Davis at 11:23 AM