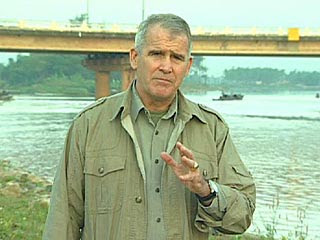 Retired Marine Lt Colonel Oliver North wrote about the end of the Iraq War in his latest column.

WASHINGTON -- They are coming home. For the first time since March 19, 2003, there are no U.S. combat or combat support troops in Iraq. There is still a contingent of U.S. Marines guarding the biggest American embassy in the world and the largest military attache's office at any diplomatic mission. But there is no doubt in anyone's mind -- ally or enemy -- that the war in Iraq is over. The only uncertainty now: Who won?

Short answer: America's soldiers, sailors, airmen, guardsmen and Marines -- and the American people whose sons and daughters served in Iraq. Though our commander in chief cannot utter the word "victory," it is. Defense Secretary Leon Panetta -- in Baghdad for a ceremonial "casing of the colors" for U.S. Forces-Iraq -- came close when he said of all who served during eight years and eight months of war: "You came to this 'Land Between the Rivers' again and again and again. You did not know whether you'd return to your loved ones. ... Your sacrifice has helped the Iraqi people to cast tyranny aside and to offer hope for prosperity and peace to this country's future generations."

You can read the rest of his column via the below link:

http://townhall.com/columnists/olivernorth/2011/12/16/iraq__victory_or_defeat/page/full/
Posted by Paul Davis at 3:52 AM