Take The Lead: Encore's 'The Take' Is A Four-Star TV Crime Series 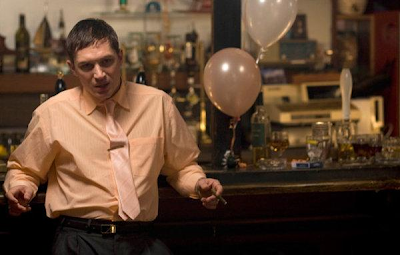 If you missed the first episode of Encore’s original miniseries, “The Take,” then be sure to order it up on OnDemand before you watch tonight’s knock-you-on-your-butt two-part episode.

The series from Martina Cole’s best-selling crime thriller centers around an East End London crime family in the 1980s and it’s every bit as good as “The Sopranos” was in its prime — which was all the time.

You can read the rest of Linda Stasi's piece via the below link:

I saw the first episode of The Take and I liked it. I plan to catch the second episode tonight, or I'll catch it later Comcast's On Demand.

Linda Stasi compared the British crime series to The Sopranos, but although Goodfellas was a film, not a TV series, I see The Take as more of a British version of Martin Scorsese's great crime film.

Tom Hardy (seen in the above photo) portrays a half-crazed British hood similar to Joe Pesci's wild and violent character Tommy in Goodfellas. I also liked Brian Cox as the crime boss. The character is like a British Paulie, the mob captain portrayed by Paul Sorvino in Goodfellas.

I look forward to watching the rest of this excellent crime series.
Posted by Paul Davis at 10:58 AM