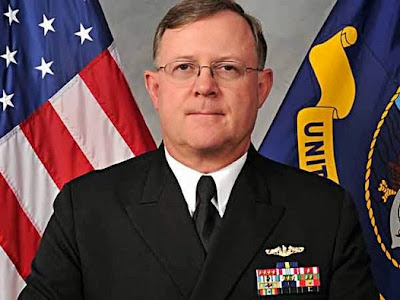 Philly.com offers a report on a Navy admiral being implicated in a NCIS investigation into  counterfeit casino gambling chips.

WASHINGTON (AP) - The No. 2 officer at the military command in charge of all U.S. nuclear war-fighting forces is suspected in a case involving counterfeit gambling chips at a western Iowa casino and has been suspended from his duties, officials said.

Giardina, deputy commander at U.S. Strategic Command, was suspended on Sept. 3 and is under investigation by the Naval Criminal Investigative Service, a Strategic Command spokeswoman said.
The highly unusual action against a high-ranking officer at Strategic Command was made more than three weeks ago but not publicly announced at that time. The command is located at Offutt Air Force Base near Omaha, Neb.


Air Force Gen. Robert Kehler, who heads Strategic Command, suspended Giardina, according to the command's top spokeswoman, Navy Capt. Pamela Kunze. Giardina is still assigned to the command but is prohibited from performing duties related to nuclear weapons and other issues requiring a security clearance, she said.

Note: The above photo of Admiral Giardina was released by the U.S. Navy.