My Crime Beat Column: The Kitten Killers and How a Dog Guy Came To Adopt a Feral Kitten 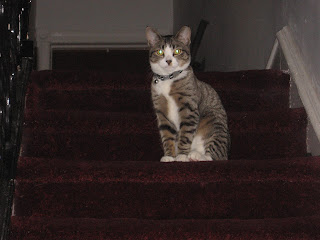 While searching the Internet in hope of learning more about cats, I came across a piece in the Philadelphia Inquirer from October about the death of Cuddles, a six-week-old kitten who was stoned and scorched.

The tortured kitten was rescued by an animal-control officer, who named him Cuddles, after the poor, injured animal climbed up his shirt and cuddled against his neck.


I recall that a 19-year-old knucklehead was later arrested for animal cruelty.

As a crime reporter and columnist I’ve covered some particularly heinous crimes in my time, including terrorism, murder and child abuse.

While accompanying Philadelphia police officers out on patrol, I’ve often witnessed the horrible acts that people do to people, but I can still be shocked by the cruel and senseless torture and killing of a defenseless kitten.

To be honest, for most of my life I’ve disliked cats. I thought them to be unfriendly, sneaky and sinister. I was, and am, a dog guy.

Cats were the arch-enemy of my late dog, Duchess, a half-German Shorthair, half Black Lab. She was trim, sleek and jet-black with small patches of white on her chest, legs and tail. She was the smartest, fastest and most lovable dog I’ve ever owned. 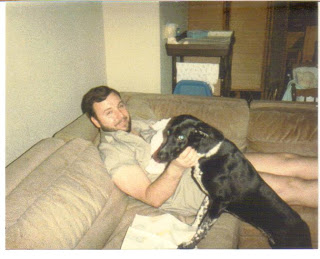 My wife’s grandfather is an accomplished carpenter among other skills, so I asked him to build a doghouse for Duchess. I thought he would simply slap some wood together, but he delivered an insulated doghouse with aluminum siding. The doghouse was built better than most houses.

The doghouse had a flattop roof and Duchess loved to lay there and bask in the sun much like Charles M. Schulz’s cartoon dog Snoopy. Duchess was a house dog, so during the winter months feral cats would sneak into the unoccupied and wonderfully warm doghouse to escape the cold, rain and snow.

This intrusion did not go unnoticed by Duchess. The cats drove her wild and she would let us know that she wanted out of the house fast in order to protect her territory.

When we opened our back door to let her out she would hit the yard like a rocket and chase the cats from her doghouse and her yard. I had to break up several scuffles between Duchess and the fleeing feral cats that she trapped.

Duchess lived to the grand old age of 18. And now I have one of her arch-enemies living in our house.

I began to appreciate cats two years ago when a feral litter in a vacant home on the other side of our yard produced two kittens. The kittens were named Circles and Little Girl by my next-door neighbors, a warm and caring woman and her equally warm and caring adult daughter. The two women left food and water out on their back porch for the feral cats.

Circles and Little Girl grew fast and as full grown cats they roamed and hunted in our backyards in my South Philadelphia neighborhood.

My area of South Philly has been called “the country in the city.” Perhaps because we live close to a park and have trees and small lawns not usually associated with urban living, we have an overabundance of squirrels, pigeons, and many other kinds of birds in the neighborhood. We even had a raccoon as a nocturnal guest.

Little Girl and Circles hunted the birds and squirrels. Perhaps they even confronted the raccoon at night while we slept. The two cats cleared our backyards of all of these pests. I began to see the cats as our backyard guardians.

I retired from the Defense Department in November of 2007 and I began to work at home as a full-time writer. Little Girl had a litter of five my first summer working at home and I, my wife and our next door neighbors observed the litter of tiny kittens scamper and romp with each other and their mother in my yard. Little by little, the kittens grew unafraid of us and we had a joyful summer watching them begin life.

And then the kittens began to suffer terribly and die.

I was unable to do anything other than watch them suffer and die, one by one. I then had the grim task of disposing of the dead kittens. My wife found a piece of discarded pizza in our yard and we wondered if one of our cat-hating neighbors had poisoned the kittens.

One kitten, the runt of the litter, survived. My wife suspects that as she was still feeding from her mother, she did not eat the poisoned pizza like the others in the litter.

I called the police and an officer came and made a report, but we could not prove our suspicions and there was not much he could do other than write a report.

I later contacted the Pennsylvania Society for the Prevention of Cruelty to Animals (PSPCA), to report the incident and to confirm that it was illegal to poison feral cats and kittens.

“Yes, it is illegal to poison stray and feral cats,” Helen Redfern, the Director of Outreach Programs for the PSPCA, told me. “These animals are protected by Pennsylvania Code 5511, which forbids cruelty to animals. Unfortunately, it is very hard to catch those who poison or cause other harm to feral and stray cats, as well as other stray animals.”

Redfern went on to state that they come across the poisoning of feral cats quite often. People who don’t want the cats in their gardens or near their homes often resort to using poison.

“Stray cats, because they are usually friendly and trusting of people, are more likely to be killed by some other method,” Redfern said. “Last spring, the PSPCA investigated a series of deaths in which stray cats were killed by even worst methods than poison. Some had sticks shoved down their throats.”

Redfern suggested that the best way to control the feral cat population is through “Trap, Neuter, Release, Management programs (TNRN). Cats are neutered and receive vaccinations before being released back to their colonies, she explained.

“Unneutered cats can produce thousands of offspring in just a few short years,” Redfern said. “Neutering is the best and most humane way to control the population.”

Redfern said that there are more humane ways to keep feral cats out of gardens, such as using coffee grounds or orange and lemon rinds to keep the cats away.

“Feral cat colonies are a part of living in a city,” Redfern said.

Little Girl, a true feral cat, would not enter my neighbor’s home, despite their best efforts to induce her.

The surviving feral runt kitten we named Kit is now roaming our house — a house that up to now only welcomed dogs. Kit initially lived in our back laundry room, hiding behind the enclosed radiator, and came out only to eat the food we set out. We used string to bring her out to play with us and she slowly warmed to us.

It truly pained us to hear Kit’s mother Little Girl call out for her surviving kitten and to hear Kit’s sad little call back from inside our laundry room during that first week. But we knew that we were offering the feral kitten a good life that could last more than 12 years. As a feral cat, she would be dead in about two years.

Today, Kit is an absolute treasure. She is a lovable character and her daily antics are amusing and endearing. She follows me around the house and she sleeps in a chair beside my desk as I work. She has become my pal.

Poor Duchess must be rolling over in her grave. I plan to buy another dog soon, thus giving equal time to dogs and cats in my house.

If you know of or suspect animal cruelty to cats, kittens, dogs or other animals, contact the ASPCA or your local police.

Note: Our cat Kit appears in the top photo. I'm holding my infant daughter and petting our dog Duchess in the other photo.
Posted by Paul Davis at 4:59 PM