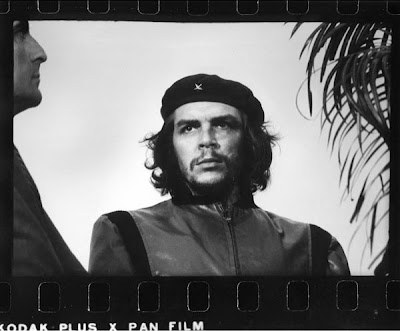 John Fund at National Review Online offers an interesting piece on the violent history (and myth) and continuing influence of the communist guerrilla Che Guevara.

The stern photo of revolutionary Che Guevara taken by Alberto Korda in 1960 is one of the most reproduced images on the planet, appearing on posters, flags, postcards, T-shirts, and even bikinis. Sadly, the ubiquitous appearances of Che — hailed today usually by his first name only — demonstrate the near-total failure to educate people about the blood-soaked cruelty he really represented.

... After Fidel Castro seized power in 1959, Che was instrumental in setting up forced-labor camps for dissidents, gays, and devout Catholics. He was put in charge of La Cabaña Fortress prison for five months. There are varying accounts of how many people were executed under his command during that time, and how many deaths are attributed directly to Che as opposed to the regime overall, but some sources say that more than 100 journalists, businessmen, and followers of the previous regime faced death by firing squad at La Cabaña, under Che’s jurisdiction.

... Nor was Che’s violence directed only against Cubans. Author Humberto Fontova points to evidence that Guevara, the chief instigator of Castro’s revolutionary efforts overseas, was involved in a November 1962 terrorist plot to use 1,200 pounds of TNT to blow up Macy’s, Gimbels, Bloomingdale’s, and Grand Central Station on the day after Thanksgiving, the busiest shopping day of the year. Such an act could have rivaled 9/11 in its destruction. This is hardly a man who deserves to be honored as a hero on T-shirts.

You can also read my interview with Humberto Fontova about Che Guevara via the below links: