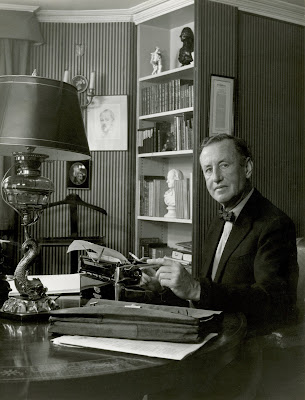 The James Bond web site MI6 noted that Ian Fleming died on August 12, 1964 and offered Fleming's obituaries from the Times of London and the New York Times.

Ian Fleming, creator of James Bond 007, was struck by a heart attack whilst vacationing at Sandwich with his wife and 12 year-old son on August 12th, 1964. In the ambulance speeding him to Canterbury, where he died three hours after arrival, he managed one last civilized Bond-like gesture, "I'm sorry to have troubled you chaps," he told attendants.


Below are obituaries published the following day by two of the world's foremost newspapers: The Times of London and The New York Times.
Mr Ian Fleming, whose death at the age of 56 is announced on another page, was one of the most successful and controversial thriller writers in recent years.
Ian Lancaster Fleming was born in 1903, son of Major Valentine Fleming, MP, DSO. He was educated at Eton and Sandhurst, and then at Munich and Geneva universities. In 1929, having failed to secure a place in the Diplomatic Service, he joined Reuter's at a time when the international wire services were struggling for supremacy. 'Reuter's was great from in those days,' Fleming said afterwards, 'a very good mill. The training there gives you a good straightforward style. Above all, I have to thank Reuter's for getting my facts right.'
The Times
He covered the trial of the Vickers engineers in Moscow in 1933, and was offered the job of Reuter's assistant general manager in the Far East. He decided instead to seek his fortune in the City, an attempt which continued, without much success, first as a banker, then as a stockbroker, until he joined the Navy in 1939. As personal assistant to the Director of Naval Intelligence, he found the war 'intensely exciting'. When it was over, Lord Kemsley offered him the foreign managership of Kemsley )now Thomson) newspapers. Fleming accepted on condition that he could have two months' holiday a year to spend at his house, Goldeneye, in Jamaica, where he subsequently did most of his writing.
If his war experiences and his post-war job provided the background for his thrillers, Fleming maintained that it was his marriage to Anne Viscountess Rothermere in 1952 which spurred him to start writing. 'I was in the process of getting married,' he said, 'which is a very painful thing to do at the age of 44; so to take me mind off the whole business, I sat down and wrote a novel.' The noel was a spy story, Casino Royale (1953), remotely derived from a real case in the history of Soviet espionage activities in France: it introduced the handsome, ruthless British agent, James Bond ('007 - licensed to kill'), and the various elements - a gambling scene, a torture scene, physical luxury and knowingness about the world's ways - which were to become the hallmarks of Fleming's style. It was well received and he soon followed it with other James Bond adventures, Live And Let Die (1954), Moonraker (1955), and Diamonds Are Forever (1956).
You can read the rest of the obituaries via the below link:
http://www.mi6-hq.com/sections/articles/chronicles_19640812_ian_fleming_dies.php3?t=&s=&id=03550
Posted by Paul Davis at 8:12 AM