The Late, Great Underappreciated George V. Higgins... Who Told The Whitey Bulger Story In His Novel "At End Of Day" 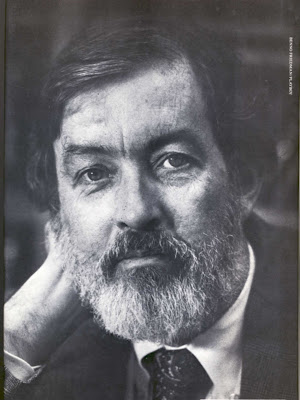 Jim Sherman at the Houston Chronicle offers a piece on George V. Higgins, author of The Friends of Eddie Coyle and other novels.

Higgins, who I consider one America’s greatest novelists, has been on my mind thanks to the trial of Boston hoodlum James “Whitey” Bulger, who was convicted today in 11 killings and other crimes.

It’s a tale right out of a Higgins novel: an amoral Irish mobster, brother to a powerful politician, whose rackets and murders were condoned for yearns by the FBI in exchange for information about the Italian mafia — much to the frustration of state and local cops who knew all along who was responsible for dozens of bodies scattered all over the Bay State.

In fact, it is right out of a Higgins novel.

At End of Day, published a year after Higgins’ death, is based on the Bulger case, and the author was uniquely qualified to write it.

For several years (1967-73) Higgins worked as a state and federal prosecutor specializing in organized crime, and for the next decade (1973-83) he was a defense attorney whose clients included Eldridge Cleaver, G. Gordon Liddy, and many of the same Irish and Italian thugs he had prosecuted.

You can also read an earlier post on George V. Higgins via the below link:

Note: In addition to being a prosecutor, defense attorney and novelist, Higgins was also a newspaper reporter and columnist.
Posted by Paul Davis at 1:05 AM