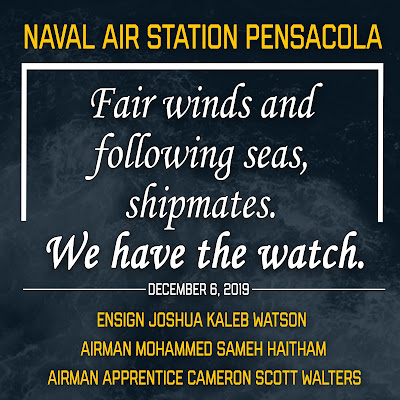 Having stood a good number of security watches on ships, boats and naval bases during my time in the U.S. Navy, my heart goes out to the sailors who died in the line of duty during the active shooting incident at NAS Pensacola.


The U.S. Navy News Service released the below statement:


The identities of the Sailors are:


“The sorrow from the tragic event on NAS Pensacola will have a lasting impact on our installation and community,” said Capt. Tim Kinsella, commanding officer, NAS Pensacola. “We feel the loss profoundly and grieve with the family and friends of the deceased.  The Sailors that lost their lives in the line of duty and showed exceptional heroism and bravery in the face of evil.  When confronted, they didn’t run from danger; they ran towards it and saved lives. If not for their actions, and the actions of the Naval Security Force that were the first responders on the scene, this incident could have been far worse.”


An Emergency Family Assistance Center was established today and will reopen at the Fleet and Family Service Center (FFSC). FFSC will have counselors there to support witnesses, friends, family and base residents. They can be contacted at (850) 452-5990.
Posted by Paul Davis at 9:53 AM