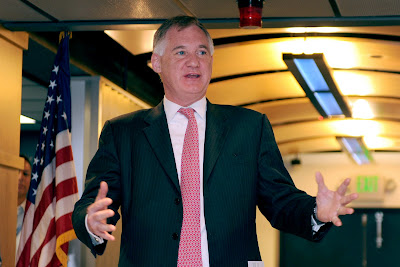 Just before cutting a ribbon to the Joint Operations Command Center alongside William Wechsler, deputy assistant secretary of defense for counternarcotics and global threats, Lynn said the threat that plagues the region has evolved beyond drugs alone.

"Transnational criminal organizations are posing a not-very-well-understood, but growing, threat to the United States," he told the task force staff. "It's something I know you are on the front lines of addressing and, ultimately, preventing."

Lynn traveled to Miami a day earlier to meet with Air Force Gen. Douglas Fraser, Southcom commander, and his leadership team. In testimony last month before the House Armed Services Committee, Fraser called the task force "the center of U.S. maritime interdiction efforts in the Caribbean basin and eastern Pacific."

Using information from law enforcement agencies, the general added, the task force detects and monitors suspect aircraft and maritime vessels and then provides this information to international and interagency partners who have the authority to interdict illicit shipments and arrest members of transnational criminal organizations.

Task force members represent each U.S. military service and most federal law enforcement agencies, including the Drug Enforcement Agency, the FBI and Immigration and Customs Enforcement.

"We made the decision in April 2008 to apply our collective wisdom and knowledge across the interagency, our international partners and the joint team here," Coast Guard Rear Adm. Daniel Lloyd, commander of Joint Interagency Task Force South, said during the ceremony opening the new operations center.

The aim, he said, was "to come up with a better way to be even more effective in countering the illicit traffickers."

The new command center, Lloyd added, "is the first of its kind anywhere, and represents the very best way we know how to conduct the fight against illicit traffickers."

In the center, intelligence and operations functions come together in a state-of-the-art command, control, communications and intelligence facility, officials said, where the task force coordinates the use of Navy and Coast Guard ships and aircraft, Air Force and U.S. Customs Service aircraft, and aircraft and ships from allied nations and law enforcement agencies.

"I think it's important at this moment to recognize how far we've come," Wechsler said. "Back in the 1980s, the mission set against which [the task force] was deployed was considered to be an unsolvable problem. There was a never-ending stream of air and maritime vessels headed right for our coast. It was a direct threat to U.S. sovereignty."

Today, he added, the problem has evolved, and so has the task force. "[It] is really, in my mind, a model -- perhaps one of the best models of coordination that exists in the U.S. government," he said.
Posted by Paul Davis at 1:41 PM