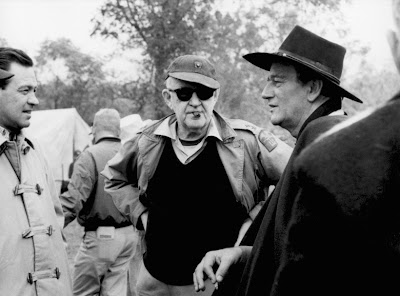 The Horse Soldiers, based on true events in the Civil War, has drama, action, humor and pathos. I've seen The Horse Soldiers more than a dozen times since I was a kid and I still love the film.

The photo above shows Holden on the left, Ford in the middle and John Wayne on the right during the shooting of The Horse Soliders in 1959.

The film web site offers the below:

This John Wayne movies list represents the actor’s most well-known films. “The Duke” embodied rugged masculinity and became a true American icon. His height, his walk, and his distinctive voice made John Wayne famous, as did his vocal conservative, anti-communist views. Of the dozens of John Wayne movies produced through the years, these are his best-known films.

You can see the list via the below link: