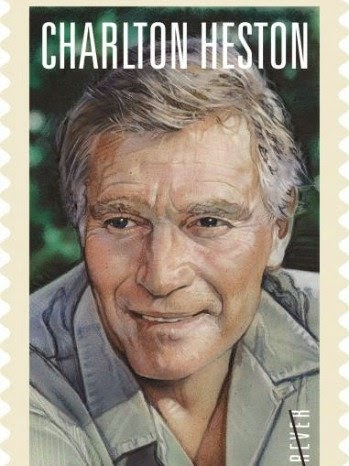 Last week Paul Bond at the Hollywood Reporter offered a piece on the ceremony honoring actor and activist Charlton Heston with a U.S. stamp.

Charlton Heston, the movie star, political activist and former head of the National Rifle Association, got his own postage stamp on Friday, unveiled at a ceremony at the historic Chinese Theatre in Hollywood.

The stamp bearing Heston's image is a painting taken from a photo shot by his widow, Lydia Clarke Heston, who attended Friday's ceremony, which was part of the TCM Classic Film Festival in Hollywood.
You can read the rest of the piece via the below link:
http://www.hollywoodreporter.com/news/charlton-heston-gets-a-postage-695505
Posted by Paul Davis at 1:43 PM