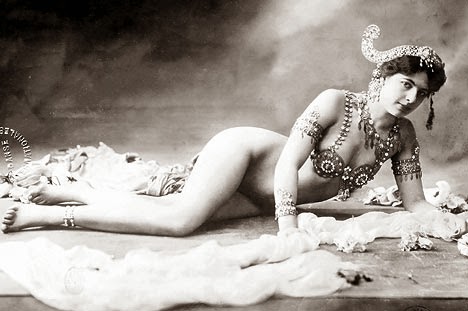 
The spy known as “Mata Hari” was glib in her final prison interrogation before her life ended in front of a French firing squad in the First World War, according to formerly top secret files from the British intelligence agency MI5.
Mata Hari, once a wildly popular Dutch exotic dancer, didn’t appear fazed when an interrogator confronted her with a long list of her lovers, an MI5 report released earlier this month states.
“When faced with her acquaintances with officers of all ranks and all nations, she replied that she loved all officers, and would rather have as her lover a poor officer than a rich banker,” the MI5 files note.

http://www.thestar.com/news/world/2014/04/24/condemned_spy_mata_hari_glib_during_final_interrogation_mi5_files.html
Posted by Paul Davis at 11:38 AM