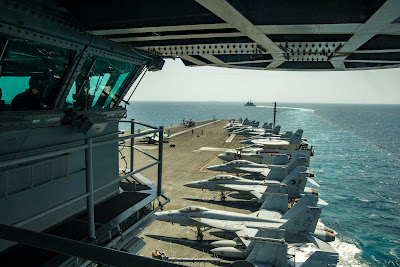 The Public Affairs Office aboard the aircraft carrier USS Dwight D. Eisenhower offers the below report:

ATLANTIC OCEAN (NNS) -- Approximately 6,000 Sailors from the Eisenhower Carrier Strike Group (Ike CSG) are conducting a sustainment exercise (SUSTEX) to maintain their readiness and capability to deploy anywhere in the world on short notice should the need arise.

"Ike CSG is doing a great job on SUSTEX. Sustaining the readiness of this strike group--so it is ready to respond to a crisis anywhere on the planet--is a bargain and an important part of what our Navy's Optimized Fleet Response Plan does for the nation," said Adm. Phil Davidson, commander, U.S. Fleet Forces.

SUSTEX is designed to test and train the carrier strike group's ability to perform and effectively respond as an integrated team during scenarios the group may encounter while deployed or during high-end warfare.

"Since returning in December 2016 from our combat deployment to the Arabian Gulf, Red Sea and Eastern Mediterranean, our tasking has been to remain deployment-ready in all respects," said Rear Adm. Jim Malloy, commander of Ike CSG. "The Navy has invested and focused its limited resources to keep us fully manned, trained and equipped in case we are needed for a crisis."

"SUSTEX provides a realistic and challenging at-sea opportunity to refresh those skills, apply what we learned on deployment and integrate any new personnel who might have rotated in since we deployed," explains Malloy.

Capt. Marc Miguez, Carrier Air Wing (CVW) 3 commander, said the underway period, the air wing's first extended underway aboard Ike since completing the 2016 deployment, has proven to be a seamless re-integration as the Ike-Battle Axe team.

"This team learned how to effectively work together and execute the missions necessary to successfully complete our last deployment. We are back together now, honing our skills, processes and procedures to ensure we are combat ready to respond if called upon again," said Miguez.

You can click on the above photo to enlarge.
Posted by Paul Davis at 1:32 AM