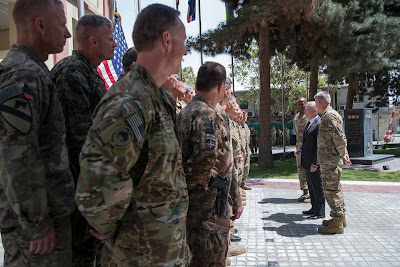 Terri Moon Cronk at the DoD News offers the below report:

WASHINGTON, April 24, 2017 — During a visit to the headquarters of NATO’s Resolute Support mission in the Afghan capital of Kabul today, Defense Secretary Jim Mattis had stern words for the April 21 Taliban attack on an Afghan military base and mosque, in which more than 100 people were killed.

The secretary spoke at a news conference alongside Army Gen. John W. Nicholson, commander of the Resolute Support mission and of U.S. forces in Afghanistan.

“As if we needed a reminder of the type of enemy we’re up against, the killing of Afghan citizens and soldiers -- protectors of the people -- just as they were coming out of a mosque, a house of worship, it certainly characterizes this fight for exactly what it is,” Mattis said. “These people have no religious foundation. They are not devout anything, and it shows why we stand with the people of this country against such heinous acts perpetrated by this barbaric enemy and what they do.”

The secretary said he had met earlier with Afghan President Ashraf Ghani and thanked him for his leadership in the midst of difficult times and for the inclusive approach of this unity government.

The secretary pointed out that President Donald J. Trump has directed a review of U.S. policy in Afghanistan. “This dictates an ongoing dialogue with Afghanistan’s leadership,” he said, “and that’s why I came here: to get with President Ghani and his ministers and hear directly and at length from … General Nicholson to provide my best assessment and advice as we go forward.”

That advice, he added, will go not only to the president, but also to the NATO secretary general and all the troop-contributing nations with which the United States coordinates and collaborates.

The teamwork between the U.S. and Afghan governments, their diplomats and their international military contingents has achieved high levels of partnership, the secretary said. “In a word, I find it impressive,” he added.

The review in Washington of the Afghanistan mission is a dialogue that includes Secretary of State Rex Tillerson, the president and his staff in the White House, and “I’d say we’re under no illusions about the challenges associated with this mission,” Mattis said

2017 will be another tough year for the Afghan security forces and the international troops who will continue to stand shoulder to shoulder with Afghanistan and against those who seek to undermine the nation’s legitimate government, Mattis said. He called on the Taliban to work honestly for a positive future for the Afghan people.

“They need only to renounce violence and reject terrorism,” he added. “It’s a pretty low standard to join the political process.”

Note: In the above DoD photo taken by Air Force Tech. Sgt. Brigitte N. Brantly Defense Secretary Jim Mattis and Army Gen. John Nicholson, the Resolute Support commander, meet with some of the mission's senior leaders and command staff at the Resolute Support Headquarters in Kabul, Afghanistan on April 24, 2017.

You can click on the above photo to enlarge.
Posted by Paul Davis at 11:44 PM