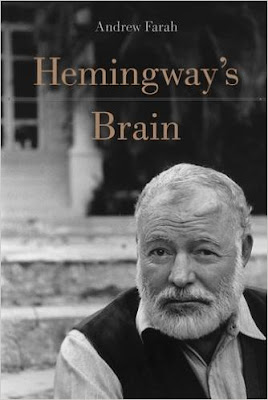 Avi Selk at the Washington Post offers a piece on a new book about Ernest Hemingway’s head injuries.

In one of Ernest Hemingway’s first published stories, a man goes into the woods and meets a disfigured prizefighter — insightful, though prone to fits of paranoia and violence.

“You’re all right,” says the visitor after they’ve chatted a while.

Nearly a century after “The Battler” was written, psychiatrist Andrew Farah contends, we would recognize that the prizefighter suffered from chronic traumatic encephalopathy or CTE — the same concussion-induced brain disease now infamous in sports, particularly professional football.

And the prizefighter’s renowned author had CTE, too, Farah argues in his new book, “Hemingway’s Brain.”

The psychiatrist from High Point University in North Carolina writes of nine serious blows to Hemingway’s head — from explosions to a plane crash — that were a prelude to his decline into abusive rages, “paranoia with specific and elaborate delusions” and the final violence of his suicide in 1961.

Hemingway’s bizarre behavior in his latter years (he rehearsed his death by gunshot in front of dinner guests, for example) has been blamed on iron deficiency, bipolar disorder, attention-seeking and any number of other problems.

After researching the writer’s letters, books and hospital visits, Farah is convinced that Hemingway had dementia — made worse by alcoholism and other maladies, but dominated by CTE, the improper treatment of which likely hastened his death. 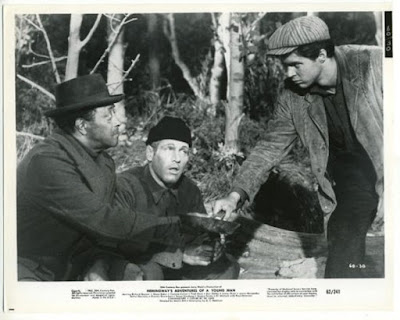 Note: Paul Newman, in the center of the above photo, portrayed the "battler," the brain-damaged former boxer, in Hemingway's Adventures of a Young Man.

The Battler and The Killers are two of my favorite Hemingway short stories.
Posted by Paul Davis at 11:20 PM