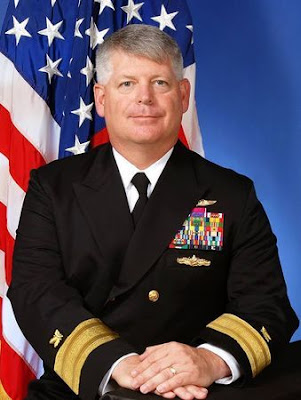 Craig Whitlock at the Washington Post offers a piece on Admiral Robert Gilbeau (seen in the above U.S. Navy photo) who was convicted in the U.S. Navy’s “Fat Leonard” bribery and fraud scandal.

The highest-ranking officer convicted so far in a colossal Navy corruption scandal began accepting a cornucopia of gifts and prostitutes from an Asian defense contractor 20 years ago and later suffered a mental breakdown when he learned authorities were making arrests in the case, new court documents allege.

Robert Gilbeau became the first active-duty Navy admiral ever to be convicted of a felony when he pleaded guilty last year to lying to federal investigators. He is scheduled to be sentenced next month and likely faces up to 18 months in prison.

In a plea deal last June, Gilbeau admitted to making false statements about his contacts with Leonard Glenn Francis, also known as "Fat Leonard," a crooked defense contractor from Singapore who has pleaded guilty to bribing scores of Navy officials. At the time, Gilbeau and federal authorities revealed little about the nature and extent of his relationship with Francis.

But in documents filed last week in federal court in San Diego, prosecutors allege that Gilbeau, 56, was corrupted in 1997 when he and another Navy officer met Francis during a port visit to the Indonesian island of Bali and succumbed to the contractor's offer of free hotel rooms, lavish dinners and paid sex.

The relationship continued on a sporadic basis until 2012, according to prosecutors, who said Francis treated Gilbeau to numerous evenings at karaoke bars and luxury restaurants in Singapore, often capped off by assignations with prostitutes.

Prosecutors allege that Gilbeau also pocketed $40,000 in cash bribes from Francis as part of a kickback scheme to overcharge the Navy for pumping wastewater from its ships. 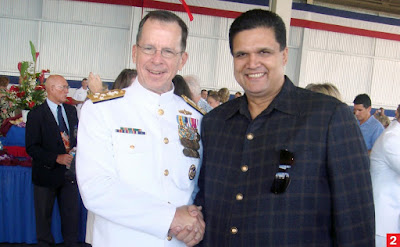 Note: The above U.S. Navy shows Leonard with then-Chariman of the Joint Chiefs, Admiral Mike Mullen.
Posted by Paul Davis at 4:33 PM