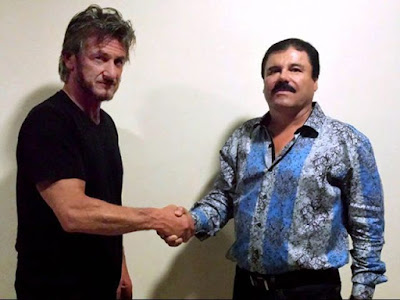 Reed Tuck at the New York Post offers a piece on Jack Riley seen in the below photo), a former DEA official, who states that actor Sean Penn should be in jail for meeting with Joaguin "El Chapo" Guzman (seen together in the above photo), the notorious drug lord now on trial in New York.


As you read this, the world’s most notorious drug dealer, Joaquin “El Chapo” Guzman, is sitting uncomfortably in a 136-square-foot jail cell in lower Manhattan’s Metropolitan Correctional Center.


But he nearly escaped justice. And it’s all Sean Penn’s fault.


Chapo had run the infamous Sinaloa cartel since the 1980s and was responsible for much of the cocaine, marijuana, meth and heroin flowing into the United States. Both American and Mexican law enforcement had attempted to arrest him, but he proved almost supernaturally slippery. He escaped from Mexican lockups twice and was a fugitive for decades, rarely sleeping in the same place twice.


On Oct. 2, 2015, Mexican marines were finally closing in on the drug lord. They had tracked him to a rugged hilltop compound in La Tuna. Just as the order was about to be given to move in, two people inexplicably arrived: Sean Penn and Kate del Castillo, a Mexican soap opera actress who had praised Chapo online. The two were there ostensibly to speak to Guzman about making a film of his life, but Penn later published an infamously softball interview with the kingpin in Rolling Stone.


Fearing the actors would be caught in the crossfire, commanders ordered the marines to stand down. The military waited for the celebrities to leave and, instead of going in on foot, chose to attack by helicopter. They lost the element of surprise, and El Chapo escaped again.


“Oh, my God! If I could get my hands on Sean Penn!” Jack Riley, the former No. 2 at the US Drug Enforcement Agency, tells The Post. “The people he put at risk because of that stunt. He should be in jail.”


Riley pushed to have Penn and del Castillo prosecuted for obstruction, but his boss at the DEA and officials at the Department of Justice declined to pursue the case, citing Penn’s protection because he was acting as a journalist. 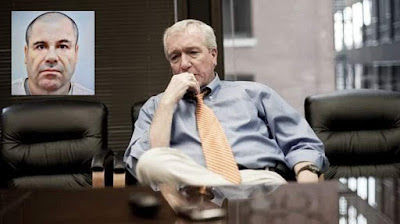