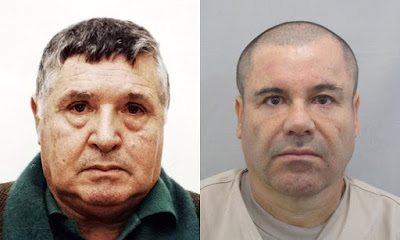 Ed Vulliamy at the Guardian offers a look back at the Sicilian Cosa Nostra boss, Salvatore "Toto" Riina (seen in the above photo on the left), and the Mexican cartel boss Joaguin "El Shorty" Guzman (seen in the above photo on the right).
They both bore the same nickname: “Shorty”. Salvatore Riina, boss of Sicily’s Cosa Nostra from the late 1970s, reportedly until his death in jail in 2017, was known as Totò ‘u Curtu in dialect. And Joaquín Guzmán Loera, convicted last week of being the world’s biggest drug lord and leader of crime’s mightiest syndicate, Mexico’s Sinaloa cartel, became famous as “El Chapo”.
Riina was also called La Belva – the beast – for self-explanatory reasons, and Guzmán, El Rapido, for the speed at which he delivered Colombian cocaine, via Mexico, to the US and Europe.
I saw them both stand trial, a quarter of a century apart: the closing phases of the mafia “Maxi trial” in 1992 with Riina convicted in absentia; then Riina’s own case in 1993; and the opening salvos of Guzmán’s trial last November. Two eras separating two hemispheres; same business, same nickname. And how that business model appeared to change, yet remained in many crucial respects the same.
You can read the rest of the piece via the below link:
https://www.theguardian.com/world/2019/feb/17/tale-two-drug-lords-el-chapo-guzman-salvatore-riina-mexico-italy
Posted by Paul Davis at 4:34 PM