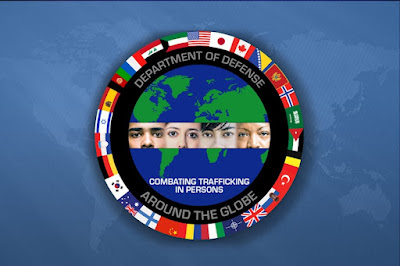 Terri Moon Cronk at the DOD News offers the below piece:

Human trafficking is as old as time and can be found almost anywhere, yet the Defense Department has made significant strides in countering it over the last 20 years, said an official in DOD's Combating Trafficking in Persons Program.

Linda Dixon, the CTIP program manager, said three elements of human trafficking are the use of force, fraud or coercion to compel a person into either commercial sex or labor — the main trafficking issues of concern to DOD officials.

As defenders of peace around the globe, DOD supports the U.S. government's zero tolerance policy on trafficking, Dixon said. DOD is also a partner with other federal agencies in the federal government's senior policy operating group, led by the State Department which meets quarterly to combat such "horrific" crimes, she added.

While 41 cases in 2016 might seem low, it may reflect a lack of awareness at the time because DOD personnel didn't know what to watch for, Dixon said.

Since that time, DOD has increased awareness, education and training among military and civilian personnel, beginning with mandatory courses for new employees on recognizing the signs of human trafficking.

Combating sex trafficking in DOD came to the forefront some years ago in Korea, Dixon noted. Some service members married foreigners, which increased troops' pay and benefits, Dixon said. But some of the foreign spouses were abandoned once they were in the United States, and a trend developed that led to sex trafficking in prostitution and other illegal activities, she said.

Since then, service members have been convicted of sex trafficking by for exploiting minors younger than 18 and other forms of sexual exploitation, Dixon said. "Some people don't realize anybody under the age of 18 cannot consent," she added.

Labor trafficking has been investigated in DOD, particularly during the wars in Iraq and Afghanistan where U.S. government contractors and subcontractors have been used as bait to entice underprivileged people from various countries. Traffickers typically promised U.S. government jobs and good salaries and benefits, but the reality was thousands of dollars in recruitment fees, cramped housing, and little pay in nearly labor-camp conditions.

Dixon said DOD has made strides over the years. In fiscal year 2021, CTIP Program Management Office and Joint Staff's Joint Knowledge Online developed course materials for military-connected high school students, parents and educators to warn kids about the perils of sex and labor trafficking. Also last year, the CTIP PMO introduced "Survivor Voices" on its website in which survivors talk about how they were exploited in DOD-related incidents of human trafficking.

This year, CTIP will also:

·         Work with the office of the undersecretary of acquisition and sustainment to develop a CTIP resource kit for DOD acquisition personnel, including any DOD personnel involved in contracting and procurement.

CTIP continues to work diligently on combating human trafficking and bringing awareness to the community because those activities can harm the DOD national security mission, Dixon said. "Human trafficking is everywhere," she said. "It's in your backyard."