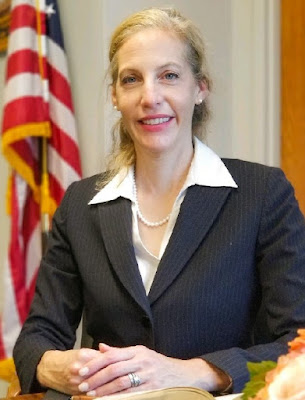 PHILADELPHIA – United States Attorney Jennifer Arbittier Williams (seen in the above photo) announced a series of updates on violent crime cases being prosecuted by the U.S. Attorney’s Office for the Eastern District of Pennsylvania, as the Office continues to emphasize its All Hands On Deck initiative which brings together federal law enforcement and agency partners to tackle the serious violent crime problem in the City of Philadelphia.

“When I announced the All Hands On Deck initiative in April 2021, I vowed that we would do all we could to stop the violence ravaging our city and support the Philadelphia Police Department in its work,” said U.S. Attorney Williams. “I also put violent criminals on notice that we were doubling down on our efforts to identify, arrest, and charge them for their crimes. The Indictments and sentencing result announced today show that we have kept our word to focus on getting the most violent offenders off the street and behind bars for a long time, so they cannot hurt anyone else in the community. And with more than 30 homicides so far in just the first 20 days of the year, our diligence and commitment to this work comes at a critically important time.”

On January 18, 2022, Eric Long, 52, of Philadelphia, PA, was arrested and charged by Indictment with one count of attempted Hobbs Act robbery, one count of possession of a firearm by a felon, and one count of carrying and using a firearm during a crime of violence. The Indictment alleges that in December 2020, the defendant entered the Express One convenience store on the 2000 block of East Allegheny Avenue in Philadelphia, demanded money from the store manager while brandishing a firearm, and then shot the store owner with that firearm multiple times. Long is also charged with illegally possessing the firearm as a previously convicted felon. If convicted, defendant Long faces a maximum possible sentence of life imprisonment, five years of supervised release, a $750,000 fine, $300 in special assessments, restitution, and forfeiture.

On January 19, 2022, Dwayne Gary, 36, of Philadelphia, PA, was sentenced to nine years in prison and five years of supervised release by United States District Judge Cynthia M. Rufe for his participation in a conspiracy to distribute, and distribution of, more than 200 grams of heroin in 2017. While engaging in this drug distribution activity, Gary also organized the sale of a firearm while in custody on an unrelated criminal charge. The defendant pleaded guilty to this four-count Indictment in September 2021.

Finally, on January 20, 2022, Josiah Brown, 19, of Wilmington, DE, was charged by Indictment with one count of carjacking, and one count of carrying and using a firearm during a crime of violence in connection with a December 2021 armed carjacking which occurred at Franklin D. Roosevelt Park in South Philadelphia. According to the Criminal Complaint filed on December 23, 2021, while the victim and an associate were speaking near the victim’s vehicle, an SUV pulled up alongside them and blocked them in. One suspect got out of the SUV, pointed a gun at the victim and demanded the keys to the vehicle, and then fled from the area in the stolen vehicle. Investigators tracked and located the vehicle later that day in Wilmington, and then in New Castle, DE. When multiple individuals approached the parked vehicle in the parking lot of the Christiana Fashion Center in New Castle, law enforcement detained five people, including the defendant who was in possession of the keys to the victim’s vehicle.

“The FBI is fully committed to protecting the safety of our citizens as we combat the violent crime problem here in Philadelphia together with our law enforcement partners,” said Jacqueline Maguire, Special Agent in Charge of the FBI's Philadelphia Division. “And while our work is far from done, the results being announced today are significant steps in getting armed criminals off of Philly’s streets and making our streets safer for all of the innocent citizens who deserve to live without fear.”

“ATF continues to work with our local, state, and federal partners to reduce violence in our communities,” said Matthew Varisco, Special Agent in charge of ATF’s Philadelphia Field Division. “Facilitating illicit transactions of firearms and narcotics jeopardizes the safety of our citizens. These offenses will always be taken seriously and today the community is safer thanks to the outstanding work by our partners at the U.S Attorney’s Office.”

The United States v. Eric Long case was investigated by the Federal Bureau of Investigation and the Philadelphia Police Department and is being prosecuted by Assistant United States Attorney Kathryn Deal.

The United States v. Dwayne Gary case was investigated by the Bureau of Alcohol, Tobacco, Firearms, and Explosives, and is being prosecuted by Assistant United States Attorney Francis A. Weber.