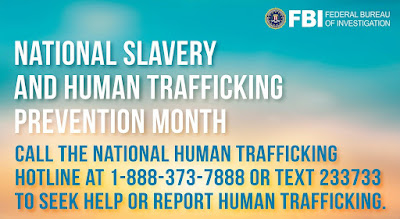 January is National Human Trafficking Prevention Month. Human trafficking involves the use of force, fraud, or coercion to obtain some type of labor or commercial sex act. For cases involving victims under the age of 18, it is not necessary to prove force, fraud, or coercion. Every year, many adults and children are trafficked worldwide, with more than 1,675 pending FBI cases as of January 2023.

“Human trafficking isn’t always a violent crime—but it is always a devastating crime that is happening with shocking frequency right here in the United States,” said FBI Springfield Field Office Special Agent in Charge David Nanz. “In instances of labor trafficking, victims are lured with promises of good jobs and fair wages but find themselves working in inhumane conditions for little to no pay. They may appear to be housekeepers or nannies, restaurant or agriculture workers, often working behind the scenes outside the watchful eye of law enforcement. The FBI asks anyone who suspects human trafficking to report it immediately.”