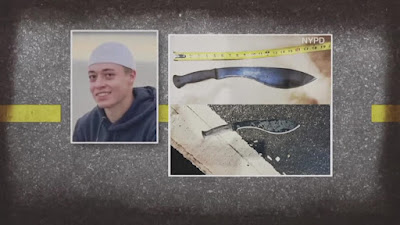 Damian Williams, the United States Attorney for the Southern District of New York, Merrick B. Garland, the Attorney General of the United States, Christopher A. Wray, the Director of the Federal Bureau of Investigation (“FBI”), Michael J. Driscoll, Assistant Director in Charge of the New York Field Office of the FBI, and Keechant L. Sewell, the Commissioner of the New York City Police Department (“NYPD”), announced today that TREVOR THOMAS BICKFORD has been charged with federal crimes in connection with BICKFORD’s efforts to wage jihad by killing U.S. Government officials and his knife attack on three NYPD officers in Times Square on New Year’s Eve.  BICKFORD was charged by Complaint with attempting to kill officers and employees of the U.S. Government and persons assisting them.  BICKFORD is currently in state custody and will be transported to and presented in Manhattan federal court at a later date to face the federal charges filed in the Southern District of New York.

U.S. Attorney Damian Williams said: “On this past New Year’s Eve, revelers flocked to Times Square to ring in the New Year with friends and family.  But Trevor Bickford allegedly targeted the iconic yearly celebration to carry out a brazen act of violence and hatred in the name of jihad.  Bickford’s alleged attack in one of the most visited destinations in the world on its busiest night of the year ironically only served to spotlight the coordination, resolve, and dedication of American law enforcement to guard the wellbeing of the public.  We sincerely thank our law enforcement partners for their outstanding work and bravery, and especially wish a full and speedy recovery to the officers injured in this senseless attack.”

Attorney General Merrick B. Garland said: “As detailed in today’s complaint, we allege that the defendant plotted a jihad-inspired attack targeting U.S. government officials, and on December 31st, 2022, attacked three NYPD officers who were part of the joint federal-state law enforcement operation protecting the Times Square New Year’s Eve celebration.  We are deeply grateful for the bravery of the officers who were injured in this horrible attack and who put their lives on the line every day to serve their communities.  Together with our law enforcement partners at every level of government, the Justice Department will continue to work to disrupt, investigate, and prosecute those who target and attack law enforcement and endanger the American people.”

FBI Director Christopher A. Wray said: “As alleged, three New York City Police Department officers were brutally assaulted in a jihad-inspired attack on New Year’s Eve while they were performing their duties to protect their city and those out celebrating the holiday.  Being a law enforcement officer requires brave individuals willing to put their lives on the line every day to keep others safe.  We are committed to holding those who would target law enforcement with violence fully accountable.”

FBI Assistant Director Michael J. Driscoll said: “As we allege today, Bickford deliberately planned and executed his violent attack against New York City Police Officers who were simply doing their job protecting the public.  Only the quick action of these brave officers prevented further harm.  The FBI's New York Joint Terrorism Task Force is unwavering in its mission to combat terrorism to keep our city safe, and we will bring any radicalized individual willing to commit violence to justice.”

NYPD Commissioner Keechant L. Sewell said: “An attack against New York City police officers is an attack against all of us – and today’s charges make it clear that such violence will be prosecuted to the fullest extent of the law.  Our NYPD family is thankful our heroic officers survived this premeditated ambush, and the entire city commends them for preventing further bloodshed during one of our nation’s largest public events.  Clearly, the threat of jihadist terrorism remains very real, and our country’s security begins with the dedicated local, state, and federal law enforcement officers who are committed to keeping us safe.  I applaud our NYPD investigators, our partners on the FBI’s New York Joint Terrorism Task Force, and the prosecutors in the U.S. Attorney’s Office for the Southern District of New York for their combined efforts on this important case.”

According to the allegations contained in the Complaint charging the defendant:[1]

In the summer of 2022, BICKFORD, a 19-year-old U.S. citizen and resident of Maine, began accessing and consuming materials espousing radical Islamic ideology, including materials promoting the Taliban and reflecting the teachings of Abu Muhammad al-Maqdisi, a prominent radical Islamic cleric who was a spiritual mentor of al Qaeda.  Over the ensuing months, BICKFORD radicalized, devoting himself to violent Islamic extremism and waging jihad.

By November 2022, BICKFORD was interested in traveling to the Middle East to support the Taliban and took steps towards traveling to Afghanistan to ally himself with the Taliban and work with the Taliban to fight against governments that, in BICKFORD’s view, oppress Muslims.  BICKFORD dedicated himself to the mission of waging jihad against officials of governments that he believes are anti-Muslim, including the U.S. Government.  BICKFORD told a family member that he wanted to travel to the Middle East so that he could be a suicide bomber for his religion.  BICKFORD ultimately decided that he would not travel overseas, and instead would wage jihad against the U.S. Government within the United States.

To carry out his jihadist mission, BICKFORD traveled from Maine to New York City in late December.  On New Year’s Eve, BICKFORD went to Times Square for the purpose of killing U.S. Government officials, armed with a large, curved knife similar to a machete, known as a kukri, with a blade over one foot long.

Protecting the civilians who attend the annual New Year’s Eve celebration in Times Square requires and involves the coordination, collaboration, and mutual assistance of multiple federal and state law enforcement agencies, including the FBI and NYPD.  During this special event, the FBI and NYPD work together and assist each other in the performance of their respective duties, in a collective effort to ensure a safe Times Square New Year’s Eve celebration.

At approximately 10:10 p.m., at 52nd Street and Eighth Avenue, blocks away from the New Year’s Eve celebration in Times Square, BICKFORD attacked three NYPD officers, who were detailed to the joint federal-state law enforcement operation to protect the New Year’s Eve celebration.  The location of 52nd Street and Eighth Avenue was an access checkpoint at which spectators could gain entry to the events in Times Square, and both FBI and NYPD personnel were deployed in the area of the checkpoint, including the three officers whom BICKFORD attacked.  BICKFORD approached the NYPD officers, declared “Allahu Akbar” — an Arabic phrase meaning “God is great,” which other radical Islamic extremists have similarly proclaimed while carrying out terrorist attacks — and stabbed and struck the officers in the head with his kukri.  Before BICKFORD could attack more targets, one of the victim officers shot BICKFORD in the shoulder, stopping the attack, and he was taken into state custody.  BICKFORD wounded all three officers, who suffered lacerations and other injuries, and each officer had to be taken to a hospital for treatment.

A bag that BICKFORD brought with him to the Times Square area was subsequently recovered by law enforcement from the scene of the attack.  BICKFORD’s bag contained, among other things, a book by al-Maqdisi promoting jihad and BICKFORD’s journal.  The al-Maqdisi book encourages followers, among other things, to wage jihad against disbelievers and governments ruled by disbelievers, and to use swords on the heads of disbelievers.  An entry in BICKFORD’s journal from December 31, 2022 — that is, the day of his attack — states that “this will likely be my last entry” and that BICKFORD believed his brother, a soldier in the U.S. military, had “joined the ranks of my enemy.”  A second bag that BICKFORD was carrying, also recovered by law enforcement near Times Square, contained a book espousing violent Islamic extremism, with certain portions highlighted, including the following: “Fight in the Name of Allah and in the Cause of Allah. Fight against those who do not believe in Allah. Wage a holy war.”

The kukri that BICKFORD used in the attack, depicted below, was recovered by law enforcement from the scene of the attack:

After being treated at a local hospital, during a subsequent Mirandized interview, BICKFORD stated, among other things, the following:

BICKFORD, 19, of Wells, Maine, is charged in the Complaint with four counts of attempted murder of officers and employees of the U.S. Government and persons assisting them, each of which carries a maximum sentence of 20 years in prison.  The charges carry an aggregate potential sentence of 80 years in prison.

The maximum potential sentence in this case is prescribed by Congress and is provided here for informational purposes only, as any sentencing of the defendant will be determined by a judge.

Mr. Williams praised the outstanding investigative efforts of the FBI’s New York Joint Terrorism Task Force, which consists of investigators and analysts from the FBI, the NYPD, and over 50 other federal, state, and local agencies.

The case is being handled by the Office’s National Security and International Narcotics Unit.  Assistant U.S. Attorneys Sarah L. Kushner and Kaylan E. Lasky are in charge of the prosecution with assistance from Trial Attorney D. Andrew Sigler of the Counterterrorism Section of the Department of Justice’s National Security Division.

The charges contained in the Complaint are merely allegations, and the defendant is presumed innocent unless and until proven guilty.