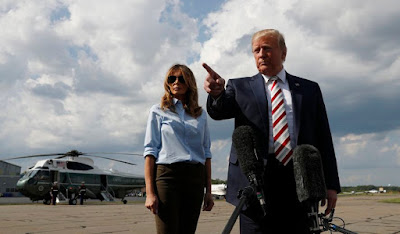 Dave Boyer and David Sherfinski at the Washington Times offers a piece on President Trump’s reaction to the mass shootings in Texas and Ohio.

President Trump said Sunday he will announce steps to stop gun violence, as top Democrats raced to blame him for fomenting two mass shootings this weekend in Texas and Ohio with a toxic stew of violence and white nationalism, and pressed him for quick action on gun control.

After conferring Sunday with Attorney General William Barr, FBI Director Christopher A. Wray, state officials and lawmakers, the president said he will outline his proposals around 10 a.m. Monday.

“We’re going to take care of it,” Mr. Trump told reporters in New Jersey before returning to Washington. “A lot of things are in the works. I’ve spoken to members of Congress about whatever we can do, and a lot of things are being done right now as we speak.”

He suggested that part of his approach will focus on mental health laws and gun ownership.

“This is also a mental illness problem,” Mr. Trump said. “If you look at both of these cases, this is mental illness. These are really people that are very, very seriously mentally ill.”

https://www.washingtontimes.com/news/2019/aug/4/trump-addresses-mass-shootings-proposals-address-m/
Posted by Paul Davis at 3:28 AM