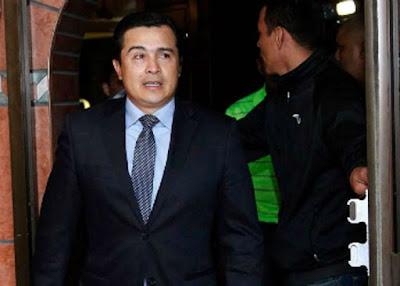 The Drug Enforcement Administration (DEA) released the below information:
NEW YORK - On October 18, DEA Special Operations Division Special Agent in Charge Wendy C. Woolcock and U.S. Attorney for the Southern District of New York Geoffrey S. Berman announced that a jury returned a guilty verdict against Juan Antonio Hernández Alvarado, aka “Tony Hernández,” on all four counts in the superseding indictment, which included cocaine importation, weapons and false-statements offenses. Hernández is scheduled to be sentenced on Jan. 17, 2020.
“This conviction serves as a warning to all those who traffic illegal drugs into our country with complete disregard for human life,” said Special Agent in Charge Woolcock. “The United States will not tolerate any individual or organization that seeks to gain profit through violence and corruption. The DEA will continue to stand with its partners to pursue justice regardless of social status. No one is exempt from being held accountable for predatory criminal activity.”
“Former Honduran congressman Tony Hernandez was involved in all stages of the trafficking through Honduras of multi-ton loads of cocaine that were destined for the U.S.,” said U.S. Attorney Berman. “Hernandez bribed law enforcement officials to protect drug shipments, solicited large bribes from major drug traffickers and arranged machinegun-toting security for cocaine shipments. Today, Hernandez stands convicted of his crimes and faces the possibility of a lengthy prison sentence.”
Hernández is a former member of the National Congress of Honduras, the brother of the current President of Honduras and a large-scale drug trafficker who worked with other drug traffickers in, among other places, Colombia, Honduras and Mexico, to import cocaine into the United States. From at least in or about 2004, up to and including in or about 2018, Hernández helped process, receive, transport and distribute multi-ton loads of cocaine that arrived in Honduras via planes, helicopters and go-fast vessels. Hernández controlled cocaine laboratories in Honduras and Colombia, at which some of his cocaine was stamped with the symbol “TH” for “Tony Hernández.”
Hernández also coordinated and, at times, participated in providing heavily armed security for cocaine shipments transported within Honduras, including by members of the Honduran National Police and drug traffickers armed with machineguns and other weapons.  Hernández also used members of the Honduran National Police to coordinate the drug-related murder of Franklin Arita in 2011, and he used drug-trafficking associates to murder a drug worker known as “Chino” in 2013. In connection with these activities, Hernández participated in the importation of almost 200,000 kilograms of cocaine into the United States.
Hernández made millions of dollars through his cocaine trafficking, and he funneled millions of dollars of drug proceeds to National Party campaigns to impact Honduran presidential elections in 2009, 2013 and 2017. Between 2010 and at least 2013, one of Hernández’s principal co-conspirators was former Sinaloa Cartel leader Joaquín Archivaldo Guzmán Loera, aka “Chapo.” During that period, Hernández helped Guzmán Loera with numerous large cocaine shipments and delivered a $1 million bribe from Guzmán Loera to Hernández’s brother in connection with the 2013 national elections in Honduras.
Hernández, 42, was convicted on four counts:  (1) conspiring to import cocaine into the United States, which carries a mandatory minimum prison term of 10 years and a maximum prison term of life; (2) using and carrying machine guns during, and possessing machine guns in furtherance of, the cocaine-importation conspiracy, which carries a mandatory consecutive prison term of 30 years; (3) conspiring to use and carry machine guns during, and to possess machine guns in furtherance of, the cocaine-importation conspiracy, which carries a maximum prison term of life; and (4) making false statements to federal agents, which carries a maximum prison term of five years.
This case is being handled by the U.S. Attorney’s Office’s Terrorism and International Narcotics Unit. Assistant U.S. Attorneys Amanda L. Houle, Jason A. Richman, Matthew J. Laroche and Emil J. Bove III are in charge of the prosecution.
Posted by Paul Davis at 9:08 AM