Operation Obliteration: How US Gunships Cornered ISIS Leader Abu Bakr al-Baghdadi Before He Dragged Three Children With Him Into A Dead-End Tunnel And Detonated A Suicide Belt, As Donald Trump Said He Watched Live On TV Link 'Like A Movie' 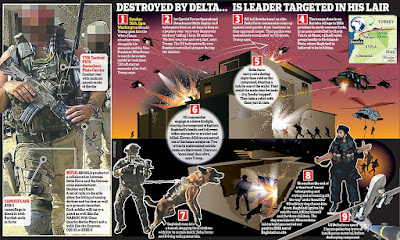 ·         The Daily Mail offers a piece on the US raid that killed ISIS leader in Syria.


·         Trump announced ISIS leader Abu Bakr al-Baghdadi 'died like a dog' after being run down a dead-end tunnel.  U.S.-led forces descended on al-Baghdadi's lair in Idlib, Syria overnight, where he was cornered in the tunnel.  Five years ago al-Baghdadi launched his self-styled 'caliphate' which brought new wave of terror to the globe.  His murderous reign came to an end after he detonated his own suicide vest and killing three of his children. Abdullah Qardash, who previously served under Sadam Hussein, is now thought to be the new ISIS leader. Iraqi-Kurdish officials detained one of Baghdadi's wives, a nephew and the wife of one of his trusted couriers.


You can read the piece and view photos and videos via the below link:

https://www.dailymail.co.uk/news/article-7619773/How-gunships-cornered-ISIS-leader-Abu-Bakr-al-Baghdadi-Donald-Trump-watched-live-TV-link.html
Posted by Paul Davis at 12:16 AM