National Vodka Day: How The Spirit Rose To Popularity, And Why James Bond Might Prefer It In His Martinis 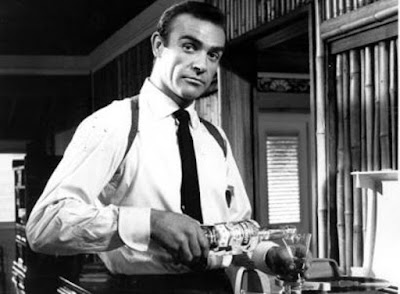 I’ve been a vodka drinker since I was a teenager serving in the U.S. Navy.

I was drawn to vodka by my childhood hero, Ian Fleming’s iconic character James Bond, who favored the beverage.

Although I’ll drink an occasional vodka martini, my preferred drink is Stolichnaya vodka on the rocks, with a slice of lime.

As today is National Vodka Day, Emily DeCiccio at Fonews.com offers a piece on vodka.

Experts, like mixologist Miguel Aranda of New York City's Osteria 57, weigh in on where vodka came from, how it gained popularity in the US, and how it is made.

Whether you like your vodka cocktails shaken, stirred, dry, or dirty, there’s a lot to learn about this clear spirit. So in honor of National Vodka Day, Fox News consulted a range of experts to deliver some insights — and recipes — regarding one of America's preferred spirits.

Bob Nolet, the vice president of marketing and the master distiller at Nolet Spirits, the producers of Ketel One, tells Fox News the drink has been "popular in the U.S. for a very long time," but credits the "cocktail mania" of the '80s for inspiring his own mother — among other spirit innovators — to develop their brands suited to new tastes.

After long and careful consideration, he's pretty confident that 007's preferred martini was made with vodka as opposed to gin.

"James Bond's preferred martini is a vodka martini, judging by how often he orders them in his novels," Nolet says. "He orders 19 vodka martinis, 16 gin martinis and one Vesper martini, made with both." (The website VinePair also credits 1962 film adaptation of "Dr. No" with popularizing the notion of a vodka martini, after Bond is provided with one at his request.)

(Bond also specifically ordered a vodka martini in the film version of "Dr. No.")

And not only is Bond fond of vodka —so are Americans. In the United States, vodka commands about 33 percent of the market share (by volume) among all spirits categories, and it ranks as the largest spirits category in the U.S., by volume, according to IWSR Drinks Market Analysis.

Note: The above photo is of Sean Connery as James Bond in Dr. No.
Posted by Paul Davis at 10:10 AM