Former FBI Director Airs Warning About Elder Fraud Public Service Announcement: Reminds Seniors and Their Loved Ones to Be Vigilant 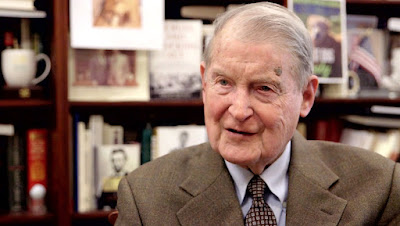 The Jamaican telephone scammer thought he had an ideal victim due to the man’s advance age.

But the con artist didn’t know that the elderly gentleman on the phone was a retired federal judge and the former director of both the CIA and the FBI.

The scamster is now in prison.

“If it can happen to me, it can happen to you,” warns former FBI and CIA Director William Webster in a video message that urges older people and their loved ones to be wary of elder fraud schemes.

The 98-year-old retired judge and his wife Lynda were prospective marks in a Jamaican lottery scam in 2014 when an unsolicited caller informed Webster he won a sweepstakes. To collect his winnings—a car and millions of dollars—Webster was told he needed to pay $50,000. When the couple declined repeatedly, the caller became abusive and threatening. The Websters called the FBI and later worked with special agents in the Washington Field Office to nab the scammer, who is now serving time in prison.

The Websters are among millions of older Americans targeted each year in elder fraud schemes like bogus lottery and romance scams. Fraudsters string along victims with promises of love or riches in exchange for cash advances or assistance moving illegal funds. Losses from these types of scams reach into the hundreds of millions each year and are increasing as the U.S. population ages.

You can read the rest of the piece and watch the PSA via the below link: