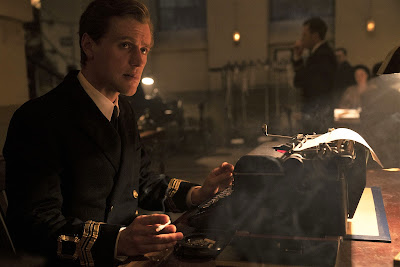 I watched and enjoyed the Netflix film Operation Mincemeat, the true story of how British intelligence fooled the Nazis into believing the allies were going to invade Greece rather Sicily in World War II.

As an Ian Fleming aficionado, I was pleased to see the late Ian Fleming portrayed fairly accurately in the film, as well as seeing his role in the grand deception plan acknowledged.

The deception plot involved the Germans reading and believing the fake secret letters on the corpse of a drowned British Royal Marine who washed up ashore in Spain. The corpse was in fact that of a derelict man who killed himself. British intelligence created a fake background for the corpse, proving him with love letters, a photo of his girlfriend and other personal items, in addition to the fake secret letters from British senior officers.

The bold deception plan worked, as the fake secret documents convinced Hitler that the allies were set to invade Greece, and the Nazi leader moved crack troops from Sicily to Greece. The deception plan saved the lives of countless allied troops who successfully invaded Sicily on July 10, 1943.

The germ of this brilliant plan was one of several suggested ideas in what was called the “Trout Memo” from British Admiral John Godfry, the director of Naval Intelligence. But according to Ben Macintyre, the author of Operation Mincemeat: How a Dead Man and a Bizarre Plan Fooled the Nazis and Assured an Allied Victory, the book the film is based on, the true author of the Trout Memo was Commander Ian Fleming. 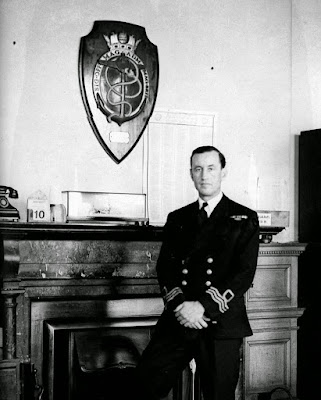 Commander Fleming (seen in the above photo) was then Admiral Godfrey’s personal assistant and according to Macintyre, Fleming read a spy thriller before the war that utilized a corpse in the plot, and Fleming placed the outrageous idea in the memo. Fleming would, of course, go on to write spy thrillers of his own that featured a certain character called James Bond.

The now iconic and world-famous Bond character was based on several spies and commandos Fleming met during the war, and Fleming said he also infused Bond with many of his own quirks and characteristics. 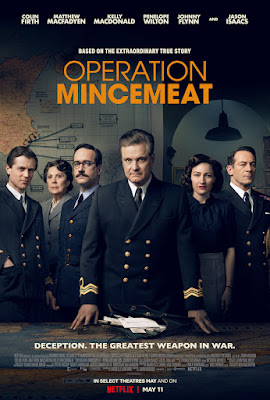 In the Netflix film, Ian Fleming is portrayed by Johnny Flynn (seen in the top photo), who narrates the film in Fleming’s sardonic voice. The two officers who headed the deception plot were naval intelligence officer Ewan Montagu and Royal Air Force officer Charles Cholondley, and they were portrayed in the film by Colin Firth and Matthew MacFadyen. Admiral Godfrey was portrayed by Jason Isaacs and Jean Leslie was portrayed by Kelly Macdonald. All of the actors were spot on, and the film was directed well by John Madden.

The film takes some liberty with the facts, as films often do, but overall, I think it is a fine film that is well worth watching, not only for entertainment, but also as a vital history lesson.

The deception plan was made into an earlier film in 1956 called The Man Who Never Was, which was based on the memoir by Ewan Montagu. But Montagu’s book and the film were unable to tell the whole story as the details were still classified at the time. 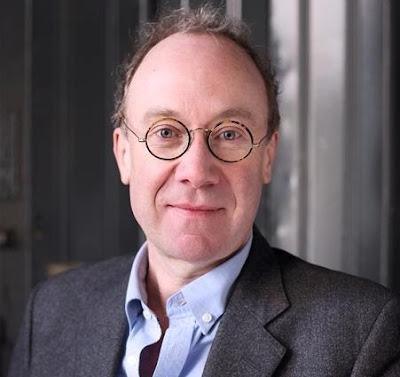 Ben Macintyre (seen in the above photo), a London Times columnist and author of several fine books on espionage history, was more fortunate, as he was given access to the declassified files of the operation. 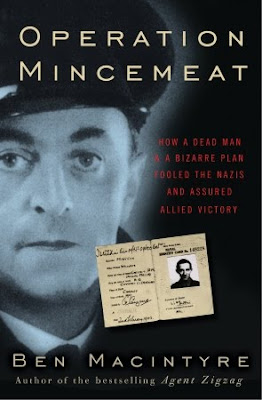 "This is the thrilling true story of the greatest and most successful wartime deception ever attempted. One April morning in 1943, a sardine fisherman spotted the corpse of a British soldier floating in the sea off the coast of Spain and set in train a course of events that would change the course of the Second World War,” Bloomsbury, Macintyre’s publisher, wrote when the book came out in 2010.

“Operation Mincemeat was the most successful wartime deception ever attempted, and certainly the strangest. It hoodwinked the Nazi espionage chiefs, sent German troops hurtling in the wrong direction, and saved thousands of lives by deploying a secret agent who was different, in one crucial respect, from any spy before or since: he was dead. His mission: to convince the Germans that instead of attacking Sicily, the Allied armies planned to invade Greece.

“The brainchild of an eccentric RAF officer and a brilliant Jewish barrister, the great hoax involved an extraordinary cast of characters including a famous forensic pathologist, a gold-prospector, an inventor, a beautiful secret service secretary, a submarine captain, three novelists, a transvestite English spymaster, an irascible admiral who loved fly-fishing, and a dead Welsh tramp. Using fraud, imagination and seduction, Churchill’s team of spies spun a web of deceit so elaborate and so convincing that they began to believe it themselves. The deception started in a windowless basement beneath Whitehall. It travelled from London to Scotland to Spain to Germany. And it ended up on Hitler’s desk.

“Ben Macintyre, bestselling author of Agent Zigzag, weaves together private documents, photographs, memories, letters and diaries, as well as newly released material from the intelligence files of MI5 and Naval Intelligence, to tell for the first time the full story of Operation Mincemeat. "

Ian Fleming never wrote about the operation, or his role in it, due to his oath of secrecy. Sadly, he died in 1964 before the documents were declassified. 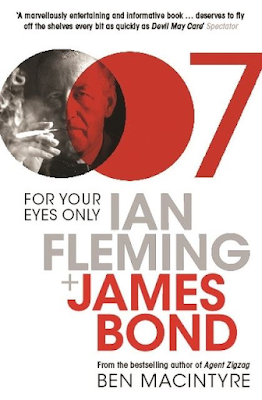 Back in 2012, the British were honoring Ian Fleming with Royal Mail stamps and the Imperial War Museum in London was marking the Fleming centenary with a major exhibition that explores his life and the influences that guided him in his creation of his famous character James Bond. Ben Macintyre wrote a companion book for the Imperial War Museum exhibition called For Your Eyes Only: Ian Fleming & James Bond.

I had previously interviewed Ben Macintyre about his earlier excellent book on WWII crook and British spy Eddie Chapman, called Agent Zigzag, and I reached out to him again and interviewed about his book on Fleming.

He said the book was not a full biography, but rather “a personal investigation into the intersection of two lives, one real and one fictional."

"All novelists find inspiration in reality, but Ian Fleming, more than any writer I know, anchored the imagined world of James Bond to the people, things and places he knew," Macintyre noted.

“Espionage is itself a shadow trade between truth and untruth and is a complex interweaving of imagination, deception and reality. As a former officer in naval intelligence, Fleming thought like a spy, and wrote like one. This book is an attempt to explore a remarkable double life and to establish, as nearly as possible, where the real world of Ian Fleming ended, and the fictional world of James Bond begins."

I asked Macintyre why he wrote the book.

I asked him to describe how Fleming was inspired by his late father who died in WWI and his own military service in WWII?

“Val Fleming is a large part of the Bond myth. His early tragic death and gallantry provide, I think, the template for the Bond character. Fleming’s wartime service is critical: plots, characters, events, gadgets, places and politics all flow directly from that war. Bond is very much a World War II personality, fighting a Cold War.”

Many people find his novels and the films to be utterly fantastic, but Macintyre said that Fleming’s plots, as well as his characters, were in fact based largely on reality. I asked him to explain this.

“Fleming always based his books firmly in reality. "Everything I write has a basis in truth". True, Bond is able to carry out exploits that would be hard to believe in fact, yet the world of spying quite often beggars belief: Agent Zigzag being a good example,” Macintyre explained.

“As a former officer in naval intelligence, Fleming thought like a spy and wrote like one,” Ben Macintyre told me. “This book is an attempt to explore a remarkable double life and to establish, as nearly as possible, where the real world of Ian Fleming ended, and the fictional world of James Bond begins.”

And now with Netflix’s Operation Mincemeat, we can see the role that Ian Fleming played in the real world of espionage.

Note: You can read my Counterterrorism magazine piece about Ian Fleming’s WWII experience and his creation of a commando group via below: 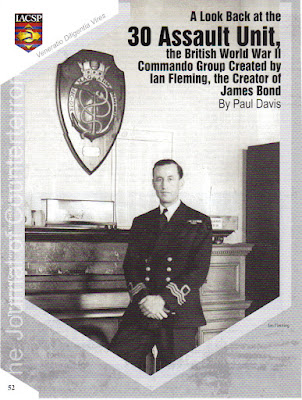 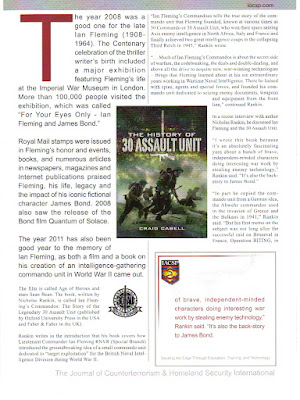 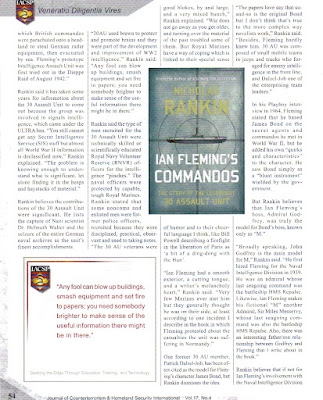 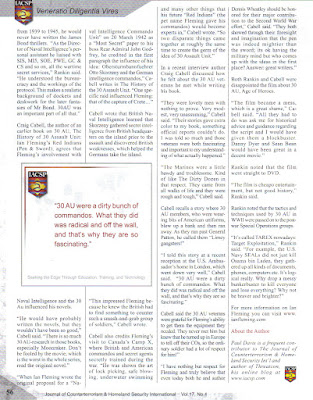