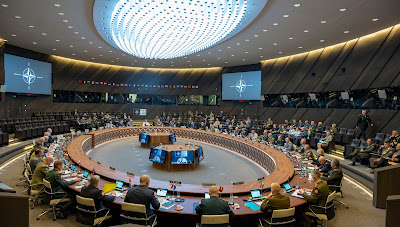 Jim Garamone at the DOD News offers a piece on NATO.

Since the Russian invasion of Ukraine began in February, the North Atlantic Alliance has proven its capabilities to mobilize for collective defense and ably support the Ukrainians fighting for their country, the top NATO military leaders said today.

Dutch Adm. Rob Bauer, the chairman of the alliance's military committee, emphasized the alliance faces a new situation. "The focus of this meeting was on collective defense," he said following a meeting of NATO military leaders. "Without a doubt, a new era for NATO has begun. In the past few months, NATO has shown that it is capable [of swiftly and effectively changing] its posture. We have implemented the largest reinforcement of collective defense in a generation."

The 30-nation Atlantic alliance capitalized on work begun after Russia first invaded Ukraine in 2014 to speedily reinforce vulnerable frontline states. All this is part of the new NATO military strategy, which — Bauer said — is evolving even as Russia poured over Ukraine's border on February 24. Russian President Vladimir Putin's war in Ukraine "has presented us with a new strategic reality," Bauer said.

A reality the NATO nations can face down.