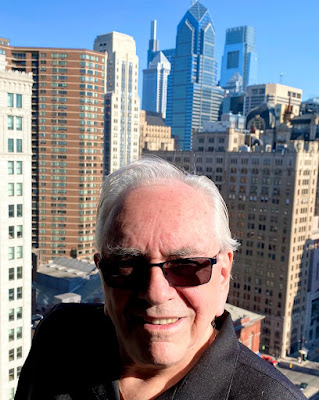 For a time, I was proud to have my Crime Beat column appear in Philadelphia Weekly alongside the contributions of veteran newspaper columnist Stu Bykofsky.

Previous to this, I was also a proud contributor for 19 years to the Philadelphia Inquirer, where Stu Bykofsky’s popular column ran for many years.

So when I read that Stu Bykofsky had written a novel about newspapers, reporters, crime and politics, called Press Card, I purchased the novel online, and I read and thoroughly enjoyed it. 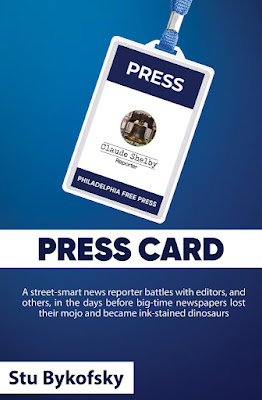 Did you ever have a bad boss? Sure, you have.​

Did you ever do anything about him (or her)?​

That conflict provides the framework for Press Card, which is funny, sad, poetic, obscene, sexy, and knowing.​

Following his demotion for cutting corners to get a political story, Shelby struggles with his bosses, and with what his job sometimes requires him to do.

When he’s at his lowest point and floating aimlessly, he stumbles into clues that could lead him to the biggest story of his life -- finding fugitive Black revolutionary Sister Sojourner.​

He chases the leads he digs out all the way to St. Lucia in the Caribbean, where he receives help from an unexpected source in a skintight dress.​

Press Card takes readers inside the Fourth Estate and reveals how some newspapers make decisions. It unmasks power plays between union and management, and reporters’ tricks.​

It is fiction based on fact.​

Press Card crackles like a police radio and rolls as fast as the presses that print the fictional Philadelphia Free Press. 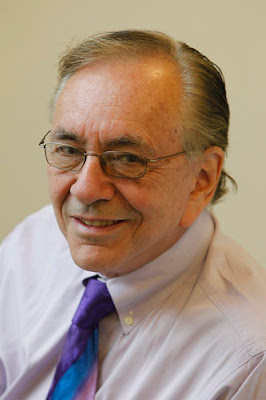 I reached out to Stu Bykofsky and asked him about Press Card.

Davis: Why did you write Press Card?

Bykofsky: Two reasons. 1- A personal challenge to myself to see if I could write something that long. “Cats Are Supermodels” was a decade earlier, nonfiction, and about 20% as long as “Press Card.” 2- Wanted revenge on some editors.

Davis: How would you describe the novel?

Bykofsky: I call it “faction” -- fact wrapped in fiction. It pulls back the curtains on how print really works, in a fast-paced, humorous manner.

Davis: Is Claude Shelby in any way autobiographical?

Bykofsky: Claude Shelby is not Stu Bykofsky, but some of Stu Bykofsky is in Claude Shelby. Claude is somewhat anti-union; Stu is very pro-union. Shelby chews gum, Stu never had, and Stu was never a political reporter.


Davis: Is the Philadelphia Free Press based on the Daily News or the Inquirer?

Bykofsky: The Free Press is a tabloid, like the News, and, honestly, the novel is a roman a clef, using the News as a template. You know the adage -- write what you know.

Davis: Are the other characters, especially the editors, based on real people?

Bykofsky: Some yes, some no. Some are complete inventions; other characters are borrowed from people I know. When inventing a character, I picture someone I know. It helps with the physical descriptions and helps me keep them separate.


Davis: Did you cover any of the stories that Shelby covered in the novel?

Bykofsky: I was working the desk the night a tanker exploded in the Delaware. That’s the chapter called Fire on the Water. I actually had a lead on Patty Hearst, through a friend, but the trail went cold fast. As to the suicide of a TV anchor, that was loosely based on Bud Dwyer, but I did not cover that. I was a TV critic for five years and will say the TV reporter Howard Scott was based on WPVI’s Marc Howard.

Davis: Why do newspapers cover crime stories so prominently?

Bykofsky: They don’t anymore -- and that is intentional. The “Woke” element in newsrooms have decided coverage of crime is racist. If you give it a moment's thought, you can imagine why.

Davis: What made you want to go into newspaper journalism?

Bykofsky: I started by joining the college newspaper at Brooklyn College (night school), because I didn’t like fraternities and it was one club that had girls, where everyone drank and cursed and smoked. It turned out writing was a gift -- I could do it easily and I figured it would be a good career. Not a lot of money, but a lot of fun. My intuition was correct. And the editor of its college paper got me my first professional job at The World-Telegram & The Sun in NYC in 1959. I retired 60 years later.


Davis: Was anyone in particular a major influence?

Bykofsky: The aforementioned college editor, Gordon Lattey -- still a friend. Got me the job at the Telegram, and later got me a freelance job with a travel magazine he edited, which opened the door to world travel -- with someone else paying the bill. I have been everywhere from Antigua to Yugoslavia, something that would have been completely impossible for someone like me who grew up in the projects.


Davis: How are newspapers today different today from the 1970s, the era portrayed in Press Card?

Bykofsky: I hate to generalize, but they seem to be run by people guided more by their politics than by news values.


Davis: What do you see for the future of newspapers?

Bykofsky: In print -- none, and that is really sad. I see them each becoming silos, catering to the perceived biases of their readers. I can’t be specific because I signed a NDA (Non-Disclosure Agreement) with the Inquirer, which I am suing for defamation.


Davis: Do you have a favorite book, novel or play about newspapers?

Bykofsky: Citizen Hearst, although only indirectly about newspapers. And The Front Page, of course, for sheer fun.


Davis: Do you have a favorite film or TV series about newspapers?

Bykofsky: There was an OLD series, maybe the ‘50s, called The Big Story, something like that, that was sort of a documentary recreation. I also strongly like Absence of Malice, although it is slightly off-kilter about libel law. But Paul Newman and Sally Field -- what’s not to like?

Davis: How would you describe your career as a newspaperman and columnist?

Bykofsky: Pleasure. The bad days were few, and I got to travel the world, and rub elbows with celebrities and politicians. (I don’t really like celebrities, but they make good fodder for story telling). Unfortunately, I now have forgotten most of the stories. Importantly, at stages in my career I was able to help people who needed it, and kick the asses of politicians, who also needed it.


Davis: Do you plan to write another novel?

Bykofsky: The first one took almost 40 years. I am 80. And I write a very active blog, so there’s no time.


Davis: Good luck with the novel.

Note: You can read Stu Bykofsky's bio via the below link:

And you can purchase Press Card via the below link: 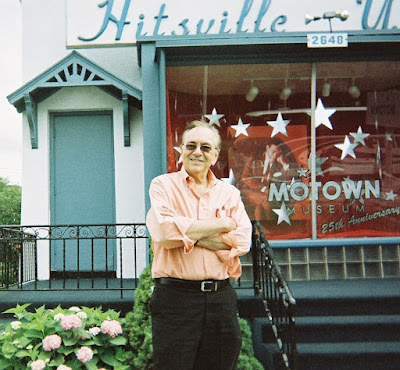