5 Things You May Not Know About D-Day 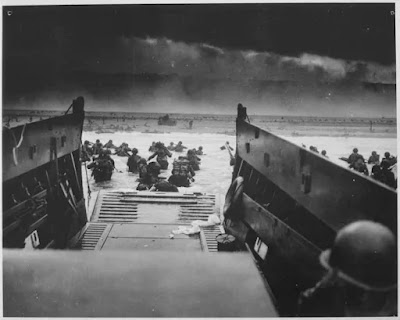 On the anniversary of the D-Day invasion, Katie Lange at the DOD News offers a piece on five things you may not know about D-Day.

D-Day. The Invasion of Normandy. Operation Overlord. It goes by various names, but we've all heard about it through history class, grandparents, the news or shows like "Band of Brothers."

June 6, 1944, is the day when more than 160,000 Allied forces landed in Nazi-occupied France as part of the biggest air, land and sea invasion ever executed. It ended with heavy casualties — more than 9,000 Allied soldiers were killed or wounded in those first 24 hours — but D-Day is largely considered the successful beginning of the end of Hitler's tyrannical regime.

The bravery by the paratroopers and soldiers who stormed Normandy that day is well-known, but there are a lot of things you may not know about D-Day. Here are a few of those nuggets.

You can read the rest of the piece and view photos of the historic invasion via the below link:

5 Things You May Not Know About D-Day > U.S. Department of Defense > Story