Thinking Of My Late Father On Father's Day 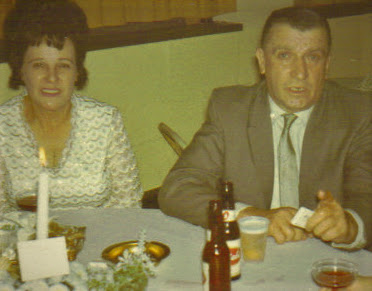 I'm thinking of my late father, Edward M. Davis (seen in the above photo with my late mother, Claire) on this Father's Day.

He had a tough life. He was cutting down trees in the Civilian Conservation Corp at age 16 during the Depression. He joined the U.S. Army at 17 and guarded the Panama Canal from bandits and terrorists.

He left the Army, married my mother, helped raise my older brother Billy and my sister Jane.

He left his wife and young children and joined the U.S. Navy during World War II.

He became a chief and a member of the Navy's elite Underwater Demolition Teams (UDT) - the forerunner to the Navy SEALs - and served as a combat frogman in the South Pacific against the Imperial Japanese.

He came home after the war and he and my mother had two more children, my older brother Eddie and me.

He worked as a lineman until he was electrocuted on a pole. He almost died, but he was a tough man and he recovered. He later worked as a union electrician.

He was a proud WWII Navy veteran, a proud American, and a patriot.

He died too young, but he lived a full life.

I think of him often.