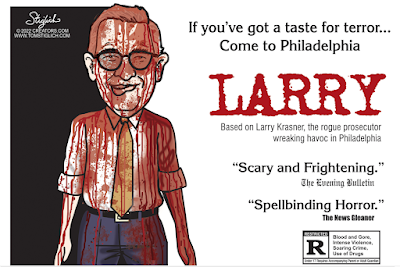 At the Philadelphia Inquirer last week, the newspaper marshaled all of its resources to support one of its progressive heroes, District Attorney Larry Krasner.

After a trio of suburban Republicans in the state House of Representatives launched a drive to impeach Krasner, the Inquirer responded last week with a barrage of censorship and propaganda aimed at propping up Krasner, while the shootings and murders in this town continued unabated.
The Inquirer's multi-pronged attack began on Tuesday when the three house members, joined by state Rep. Martina White, another Republican from Northeast Philadelphia, held a press conference on the steps of the State Capitol in Harrisburg that featured a rainbow coalition of two dozen crime victims protesting against Krasner.
It made for compelling drama. Julio Moran talked about his mother, Gladys Coriano, a religious woman barely five feet tall, and how she was shot to death by an abusive ex-husband who had repeatedly violated a protection order by stalking, harassing and attacking her.
You can read the rest of the piece via the below link:
Philly Inquirer Censors The News To Prop Up D.A. Krasner | Big Trial | Philadelphia Trial Blog