A Dangerous Actor: China May Draw Lessons From Russian Failures In Ukraine 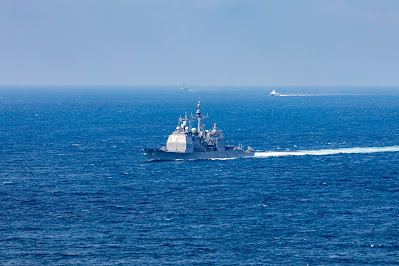 Todd Lopez at the DOD News offers the below piece:

Chinese president Xi Jinping has set a timeline for his nation's military to be capable of taking Taiwan by 2027 — just five years from now. Recent events in the Taiwan strait have some questioning the strategic situation and prospects of a near-term invasion.

Colin H. Kahl, the undersecretary of defense for policy, said that while China is very interested in expanding its sphere of political and military influence in the Indo-Pacific region, it's likely going to be more cautious when it comes to a move as aggressive as an invasion of Taiwan.

"I do not think that China wants to put themselves in a position that Russia finds itself in today, which is invading a democratic neighbor — one that I think would generate an enormous amount of global sympathy," Kahl said during a discussion Wednesday at the Defense News Conference 2022, adding China would risk broader military tensions at significant political and economic costs.

"I would hope that they would draw the lesson from Russia's experience that, 'Hey, maybe ... we shouldn't do that,'" he said. "I don't think that they've sped up their clock. ... It's no mystery that Xi Jinping has given his military until 2027 to develop the military capabilities to forcefully reunify with Taiwan — if he makes the decision to do that. But I've seen no indication that he's made that decision to do so."

Of greater concern is China's increased aggression in the Taiwan Strait, the South China Sea, and other areas in the region, and how that increased aggressive action might lead to unintended consequences that could result from misunderstandings.

"As China becomes increasingly assertive in kind of asserting its prerogatives around Taiwan, ... do they take the next step of trying to enforce those changes in the status quo in a way that runs the risk of an incident — an incident with the United States, and incident with one of our allies and partners?" Kahl asked. "We have seen the [People's Republic of China] engage in, over the last year or two, ... a trendline of increasingly unsafe and unprofessional encounters — both in ... the skies and at sea."

Now, Kahl said, the U.S. and its allies must watch out for aggressive actions by the navy and air force of the People's Liberation Army that could run the risk of causing an international incident. In the meantime, he said, the U.S. will continue to operate in the Indo-Pacific as it always has.

After Russia invaded Ukraine in February, the Defense Department identified that nation as an "acute threat," which Kahl has further clarified as meaning "both immediate and sharp." But he's also now identified Russia as being "reckless" as well, considering the actions it's taken after failing to achieve the goals it set for its invasion of Ukraine.

"I think that Russia is ... a capable military power — perhaps not as capable, frankly, and conventional as some of us may have assessed six or eight months ago ...," he said. "But they've also demonstrated that they're an extraordinarily dangerous and reckless power. And there's a way in which ... a weakened Russia becomes more dangerous on the international stage."

In desperation, Kahl said, Russia has aligned itself more with and reached out to both North Korea and Iran for assistance. Moreso, he said, because Russia's conventional forces are so heavily occupied in Ukraine, he suspects they will be forced to rely more now on unconventional capabilities such as nuclear, cyber and space, as well as misinformation and disinformation campaigns.

"Russia does not pose the challenge to the United States and the rules-based international order over the long term that China does," he said. "But in the immediate term, it's a very dangerous actor."