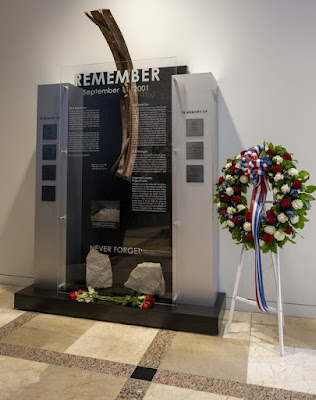 WASHINGTON - On Friday, September 9, 2022, the Drug Enforcement Administration dedicated a memorial at DEA Headquarters in Arlington, Virginia, to DEA New York Drug Enforcement Task Force Officers who have lost their lives from illness or disease caused by their work at Ground Zero after the terrorist attacks of September 11, 2001. This new memorial consists of artifacts from the World Trade Center and Pentagon and a photograph from Shanksville, Pennsylvania; as well as seven names of DEA Task Force Officers who were assigned to the DEA’s New York Drug Enforcement Task Force:

Administrator Milgram was joined by NYPD Commissioner Keechant L. Sewell and NYSP Major Brian P. Webster to honor these Task Force Officers during a private dedication ceremony attended by the families and friends.

“We will never forget the tremendous sacrifice of the men and women who responded to the events of September 11, 2001. Not only on that day, but in the weeks, months, and years that followed. These American heroes showed true courage and bravery in the face of unimaginable adversity,” said DEA Administrator Anne Milgram. “This 9/11 memorial is a tribute to their lives, their work, and their service to country. We are proud to honor these TFOs who showed incredible integrity and dedication to their mission. They will forever remain a part of DEA’s legacy, both in our hearts and as an element of the DEA Museum.”

“On September 11, 2001, more than 70 law enforcement officers – including 23 members of the New York City Police Department – lost their lives in defense of our nation,” NYPD Commissioner Keechant L. Sewell said. “And in the two decades since, hundreds more have died as a result of their rescue and recovery work that day and in the weeks, months, and years following. Tragically, we know that our losses will continue – but we are strengthened by the solemn pride and selfless devotion of all of our first responders and their loved ones. The memories of our fallen heroes live on through this memorial, and their legacies endure through every officer who continues their vital work. Thank you to the U.S. Drug Enforcement Administration, the New York State Police, and all of our 9/11 line-of-duty families who inspire us each day.”

New York State Police Superintendent Kevin P. Bruen said, “The tragic events of September 11, 2001, have left a tremendous void that is felt throughout our nation. Memorials such as this are imperative to show the survivors and loved ones of our fallen heroes that yes, we remember. These honored men and woman have displayed uncommon courage, remarkable bravery, and exceptional service. The New York State Police is forever thankful for their sacrifice and selflessness in putting others before themselves.”

The September 11th memorial, developed as part of the DEA Museum, serves both as a constant reminder of the selfless sacrifice our brave men and women made, and educates the public and visitors to DEA Headquarters about the tragedy of September 11, 2001, and the impact it continues to have on our nation. The DEA Museum and Visitors Center is located at 700 Army Navy Drive, Arlington, VA and is free to the public, open Tuesday through Saturday from 10 a.m. to 4 p.m.