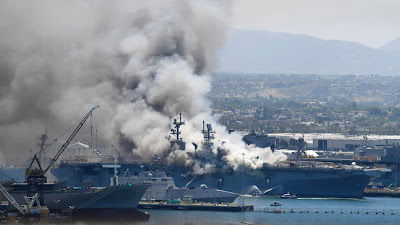 The Navy Times offers a piece on the trial of the sailor accused of setting the huge fire on the USS Bonhomme Richard.

SAN DIEGO — The young sailor accused of one of the military’s worst noncombat ship disasters agreed to put his fate in the hands of a lone Navy judge who will decide whether he ignited the USS Bonhomme Richard in 2020 — or as the defense suggests, there may not have been arson at all.

Ryan Sawyer Mays (seen in the below photo) waived his right to a jury and told Capt. Derek Butler that he wants him to rule at the end of the court martial, which started Monday at Naval Base San Diego.

According to prosecutors, Mays was a young, arrogant sailor angry about being assigned to deck duty after failing to become a Navy SEAL — and he made the Navy pay in a big way.

“Your honor, it was a mischievous act of defiance gone wrong,” Cmdr Leah O’Brien told the judge during opening statements for the prosecution.

Mays’ military defense counsel, Lt. Tayler Haggerty, countered in her opening remarks that it’s the Navy who is wrong. Haggerty said investigators concluded Mays did it before the probe was complete and then ignored evidence and witness accounts that didn’t fit into that narrative so they could find a scapegoat for the loss of a billion-dollar ship that was mismanaged by senior officers.

Once investigators pinned the blame on Mays, who was known for being sarcastic and flippant, “nothing else mattered,” Haggerty said.

“Just because the government eliminates, ignores pieces of evidence, it doesn’t mean the court should,” she told the court. Haggerty told the judge by the end of the trial, which is supposed to last two weeks, “you will exonerate this sailor and find him not guilty of both charges.”

Mays is charged with aggravated arson and the willful hazarding of a vessel. He has denied any wrongdoing. 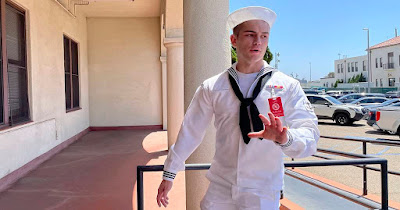