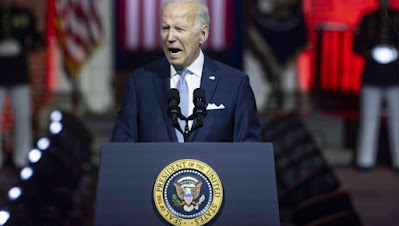 WASHINGTON, D.C. — Having politically weaponized federal law enforcement for his own political gain, President Biden has now taken to the airwaves to warn that democracy is in real danger.

"Folks, I'm using the feds as best I can to destroy my political opponents, but let me be clear: I'm going to have to break more laws and seize even more power if I'm going to stop fascism," yelled President Biden, lighted in blood-red and surrounded by soldiers. "I don't care if that means a federal takeover of elections, an overthrow of the judiciary - heck I don't care if I have to use F-15s to carpet bomb every single Republican neighborhood in the country. We will forcibly commandeer every lever of power and communication our nation has - to, you know, defeat fascism."