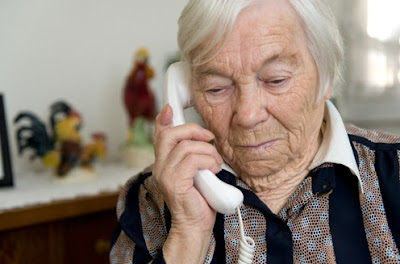 Two defendants were sentenced today to substantial prison time for their participation in a large-scale “grandparent scam.”

According to court documents, Timothy Ingram aka “Bleezy,” 30, of North Hollywood, California; and Joaquin Lopez, 46, of Hollywood, Florida, were part of a network of individuals who, through extortion and fraud, induced elderly Americans across the United States to pay up to tens of thousands of dollars each to purportedly help their grandchild or other loved one. In spring 2022, Ingram and Lopez each pleaded guilty to one count of conspiracy under the Racketeer Influenced and Corrupt Organizations (RICO) Act. Today, the court sentenced Ingram to 108 months in prison and Lopez to 24 months in prison.

Members of the network contacted elderly Americans by telephone and impersonated a grandchild, other close relative or friend of the victim. They falsely convinced the victims that their relatives or friends were in legal trouble and needed money to pay for bail, for medical expenses for car accident victims, or to prevent additional charges from being filed. The defendants and their co-conspirators then received money from victims via various means, including in-person pickup, the mail, and wire transfer, and then laundered the proceeds, including through the use of cryptocurrency. Ingram, personally and through others, directed a network of money mules in California. Ingram personally picked up cash from victims and recruited others to participate in the scheme. Lopez also received wire transfers from numerous victims and funneled victim proceeds for co-defendant Tracy Knowles, who remains at large.

“The Department of Justice’s Consumer Protection Branch will continue to investigate and prosecute criminals who target elderly Americans and take advantage of their concern for loved ones,” said Principal Deputy Assistant Attorney General Brian M. Boynton, head of the Justice Department’s Civil Division. “We are grateful to our partners at the U.S. Attorney’s Office for the Southern District of California and the FBI for their work to advance the department’s efforts against organized elder fraud, and to the San Diego County District Attorney’s Office.”

“These defendants were crucial members of a sophisticated criminal organization that shamelessly exploited the grandparents’ love for their grandchildren,” said U.S. Attorney Randy Grossman for the Southern District of California. “The long-lasting effects of this crime on our seniors and the community cannot be overstated.  The victims were financially and emotionally devastated by callous people who thought only of enriching themselves. With the convictions and sentences imposed today, the government is securing justice for the victims who fell prey to this heartless crime.”

“Today's sentencing of two key members of the criminal enterprise targeting our elderly population is a testament to the San Diego Elder Justice Task Force's continued commitment to bringing fraudsters to justice,” said Special Agent in Charge Stacey Moy of the FBI San Diego Field Office. “It is the FBI's mission to protect the American people and protecting our seniors from financial crimes is imperative to the well-being and safeguarding of our communities. The FBI, along with our law enforcement partners, will not stop until all the defendants are held accountable for their involvement in this complex organized crime.”

The department’s extensive and broad-based efforts to combat elder fraud seeks to halt the widespread losses seniors suffer from fraud schemes. The best method for prevention, however, is by sharing information about the various types of elder fraud schemes with relatives, friends, neighbors and other seniors who can use that information to protect themselves.

If you or someone you know is age 60 or older and has been a victim of financial fraud, help is available at the National Elder Fraud Hotline: 1-833-FRAUD-11 (1-833-372-8311). This Department of Justice hotline, managed by the Office for Victims of Crime, is staffed by experienced professionals who provide personalized support to callers by assessing the needs of the victim and identifying relevant next steps. Case managers will identify appropriate reporting agencies, provide information to callers to assist them in reporting, connect callers directly with appropriate agencies, and provide resources and referrals, on a case-by-case basis. Reporting is the first step. Reporting can help authorities identify those who commit fraud and reporting certain financial losses due to fraud as soon as possible can increase the likelihood of recovering losses. The hotline is staffed seven days a week from 6:00 a.m. to 11:00 p.m. ET. English, Spanish and other languages are available.

You can also read my Philadelphia Weekly Crime Beat column on grandparent scams below: 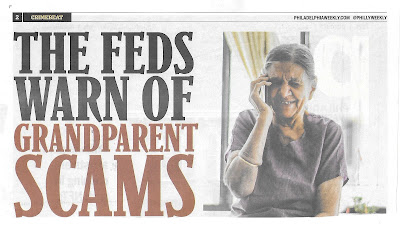 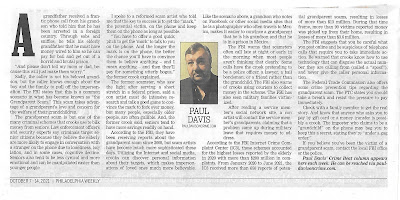