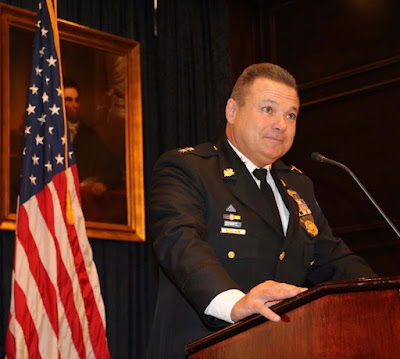 Philadelphia’s loss is Wichita’s gain. The Kansas city, where legendary lawman Wyatt Earp once served as a police officer, will benefit from all of the experience and knowledge Joseph Sullivan gained in Philadelphia.

“Sullivan has more than 25 years of law enforcement and management experience,” the announcement stated. “As Deputy Commissioner of Patrol Operations in the Philadelphia Police Department, he oversaw a force of 4,698 sworn officers and civilian personnel and was responsible for the majority of the Department’s $750 million annual budget.”

The announcement noted that since retiring from the Philadelphia Police Department, Joseph Sullivan worked in business development at Lawmen Supply Company and as President of Families Behind the Badge Children’s Foundation in Philadelphia.

“Joe Sullivan has a proven ability to successfully lead and manage a world-class police department. I have every confidence that he is the right person at the right time to take on the challenging task of ensuring Wichita residents have trust in the integrity and transparency of our police department,” said City Manager Robert Layton. “His experience in patrol leadership will help us as we work to enhance patrol operations. He joins us at a crucial time for the Wichita Police Department and will help guide us through a period of change. I look forward to welcoming him to Wichita.”

The announcement went on to state that “Chief Sullivan will be tasked with enhancing the recruitment, training and mentoring of staff and focusing on data-driven policing. He also plans on strengthening community policing and increasing citizen engagement with the department.

Joseph Sullivan will begin as chief of police in early December. He will manage a $108 million budget and supervise more than 900 employees in the state’s largest police department.

I’m happy for Joseph Sullivan, but I’m sorry to see him go to Wichita. In my view, he should have appointed Philadelphia’s police commissioner. He is far more experienced, and far more successful as a police executive than our current police commissioner, Danielle Outlaw.

Outlaw previously served as the chief of police for Portland, a notoriously liberal city, and before that she served as the deputy chief of police in Oakland police. She has little street experience and less street “cred.” I’ve spoken to a good number of Philly cops, and they are all unimpressed with her police background, and they are even less impressed with her leadership since becoming the commissioner.

Not only was Sullivan not appointed commissioner, but in January of 2020, he was forced to retire. Although he preferred not to talk about his departure with me, at the time he confirmed in texts to NBC10 reporters that he was leaving the Philadelphia Police, “But departure is not my decision.”

According To NBC10, he didn’t elaborate, except to add that he is “no longer needed.” He may have not been needed by the new commissioner, but he was most certainly needed by the city of Philadelphia. If only he had been the commissioner during the violent protests and riots in May 2020 after the death of George Floyd.

His skill and leadership would have made a huge difference in the police response to the riots, and I believe there were would have far less damage to businesses and less chaos. I’ve interviewed Joseph Sullivan several times over the years. I was thankful for his insightful and well-articulated comments when I interviewed him several times for my former Crime Beat column, which then appeared in Philadelphia Weekly.

I recall when I first interviewed Joseph Sullivan and then-Commissioner Charles Ramsey in 2013 for Counterterrorism magazine about Philadelphia’s Homeland Security Bureau, which Joseph Sullivan then headed.

I interviewed Commissioner Ramsey at the Roundhouse, the former police headquarters, and he expressed total confidence in Joseph Sullivan’s ability and leadership skills.

“I’ve given him all the “toys,” Ramsey told me.

Commissioner Ramsey said he had transferred SWAT, bombs, canine, aviation, and the marine unit to the Homeland Security Bureau. He depended on Joseph Sullivan to keep Philadelphia safe from terrorists and other public safety threats.

Perhaps the next mayor will bring Joseph Sullivan home to Philadelphia and appoint him as the police commissioner. Philadelphia, like Wichita, would be in good hands.