'The Next Time I Die’ Somewhere Between Philip K. Dick and The Twilight Zone 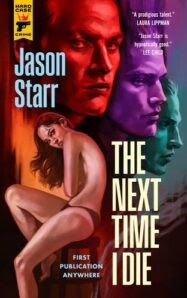 The Washington Times ran my On Crime column on Jason Starr’s The Next Time I Die.

“Dying was only the beginning. Steven Blitz didn’t think about his own safety when he saw the man trying to force a woman into his car. He stepped in to defend her and got a knife to the gut for his troubles.

“But when he wakes up in the hospital from what should have been a fatal wound, he finds the whole world changed — a different president in the White House, a loving family when he’d been on average of a divorce, more money in the bank then he’s ever seen. There’s a dark side, though: in this world, Steven Blitz is not a good man. And now he’s got to get himself out of serious trouble without even knowing what it is he’s done wrong.”

This is how Hard Case Crime, the publisher of Jason Starr’s “The Next Time I Die,” describes the unusual crime novel.

Hard Case Crime goes on to state that “The Next Time I Die” is a paranoid thriller that will draw the reader into its claustrophobic web of suspense, leaving one questioning everything one thinks one knows.

The publisher’s description certainly drew me to the suspenseful, reality-bending crime novel. And I was not disappointed.

The narrator of “The Next Time I Die,” Steven Blitz, a 47-year-old lawyer who is defending a brilliant serial killer, has a fight with his disgruntled wife, who throws him out of the house. This leads him to a gas station, a physical altercation and a stab wound, and his waking up in a hospital to an entirely different world.

In this new reality, Steven Blitz discovers that he has lost weight, and gained an adoring wife, a loving young daughter, two women he is seeing on the side, and a lot of money he apparently earned playing the stock market. He has also gained a stalker.

As if waking up in an alternate reality was not frightening enough, Steven Blitz begins to get a series of strange texts on his phone that simply read, “I SAW YOU STEVEN BLITZ.”

“This is the entire text from an unknown number displayed as ‘anontxt.’ The message would be disturbing and confusing enough if it wasn’t the same ‘final though’ I had after that guy stabbed me in the parking lot,” Steven Blitz informs the reader. “Is this just some wild coincidence, or does this mean that after I got stabbed, I had a premonition of this text? But how could I have a premonition about an event in another life, or another version of my life?”

I reached out to Jason Starr and asked him how he would describe “The Next Time I Die.”

“When a prominent defense attorney tries to break up a crime, he winds up getting stabbed in the gut,” Mr. Starr replied. “He should have died from the wound, but instead he winds up in a new reality, somewhere between Philip K. Dick and The Twilight Zone.”

BOOK REVIEW: 'The Next Time I Die' - Washington Times

Labels: crime thriller, Jason Starr's The Next Time I Die, My Washington Times On Crime column