A Review Of 'I Am Soldier Of Fortune: Dancing With Devils' 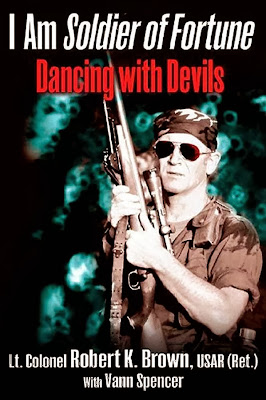 Robert K. Brown's first-person tour through war zones, revolutions, doomed adventures and the rise of Soldier of Fortune magazine has the punch of a Hollywood action thriller. There are heroes, villains, blazing guns, intrigue, humor, swagger and violent death. Unlike an action movie, it’s real.

From Cuba to Vietnam, Rhodesia to Latin America and Afghanistan, Bob Brown redefined participative journalism while creating a forum for the global warrior culture.

Each issue of Soldier of Fortune — circulation 1 million plus — is iconic to readers of a special stripe: veterans, active duty, special operators, mercenaries, gun lovers, law enforcement, adventurers, survivalists and those wish they were any of those. It’s not unusual for a combat veteran to admit he got his first glimpse of what he could become in the pages of SOF.

Soldier of Fortune launched in 1975 as a way for Mr. Brown, a Green Beret in Vietnam, to reach out to brothers in arms. SOF became a global touchstone linking a broad community of warriors willing to go anywhere and do anything — for adventure, for a cause or for a price. Along the way, Mr. Brown and his rugged band of paramilitary journalists wrote, photographed and shot their way through a score of revolutions and brush fire wars, were damned and praised by governments around the world, exposed crooks and scam artists and were sued multiple times for enabling mayhem and even murder.

However improbable the success of Soldier of Fortune, the story of its founder and field commander is more so.