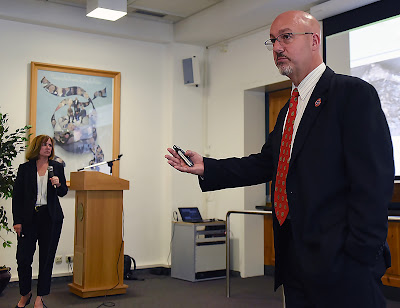 Christine June at the George C. Marshall European Center for Security Studies offers the below piece:

GARMISCH-PARTENKIRCHEN, Germany, July 13, 2018 — For the past five years, Special Agents Tom and Jean O’Connor, both with the FBI’s Joint Terrorism Task Force in Washington, have shared their experiences collecting evidence at terrorism sites with international participants attending the Program on Terrorism and Security Studies held twice a year at the George C. Marshall European Center for Security Studies here.

“The practical, real-life information provided by Tom and Jean on how to collect evidence can help our participants find out who the terrorists are and how they did it,” said retired Marine Corps Col. James Howcroft, Marshall Center’s PTSS director. “Then, you can figure out who are their friends, contacts and even, other members of the cell and this can help you stop a terrorist attack before it happens.”

Together, the husband-wife team has more than 40 years of experience investigating and collecting evidence at terrorist attack sites around the world. They have investigated large-scale terrorism sites such as the Sept. 11, 2001, attack on the Pentagon, as well as bombings on the USS Cole and at the U.S. Embassy in Nairobi and U.S. Consulate in Pakistan.

“The way we have done our training for PTSS participants is that we give a personal perspective on how to work these scenes and what investigative steps to take to locate the evidence that will help with the overall investigation,” Tom O’Connor said.

The presentation they give for each PTSS program is a special evening class on evidence and prosecution. On July 9 here, they presented case studies on the incidents they have investigated or for which they collected evidence to illustrate the evidence response team’s 12-step process, from preparation to releasing the scene.

“I think PTSS has the internationally reach that I have not seen anywhere else. Case in point, we just hit up 68 potential investigators from 44 countries in one classroom,” Tom O’Connor said.  “We have been doing this twice a year since 2013. That’s a lot of countries and individuals who have been receiving this information, and a lot of potential terrorist attacks and criminal acts that are going to be able to be solved or prevented through investigative efforts.”

He added that the information provided in their presentation not only helps when the bomb goes off, but also can help before it goes off.

“When someone is doing an investigation and they come across some of the things Jean and I have talked about, they are able to put the case together and arrest individuals before the bad stuff happens,” he said.

“I think it’s really important to have alumni come back and share their experiences with other members of the PTSS,” Howcroft said.  “My team and I strive to make sure that PTSS is a course for practitioners, and we select speakers who offer experience and practical knowledge, and there is nobody better than Tom and Jean.”

Marshall Center’s PTSS is a functionally focused program that draws in civilian, law enforcement and military counterterrorism professionals from around the world and improves their capacity to counter terrorism's regional and transnational implications. It aims to combat terrorism in all of its manifestations nationally, regionally and globally.

The first PTSS course was in 2004, and this iteration is the Marshall Center’s 28th. It began June 27 and will finish July 26.

“Through our teaching here at PTSS and talking to participants, we are also letting them know the capability of the FBI and that we have legal attaches based in U.S. Embassies throughout the world,” Jean O’Connor said. “This is important for them to know, because they all have evidence collection teams, and depending on what that level is in terms of training and capability, they could possibly use our assistance to collect evidence or have access to the FBI Laboratory.”

That is a real, practical and useful takeaway from the PTSS course, Howcroft said.

“The FBI has people like Tom and Jean who respond to events around the world, and they are there to help our partners to improve their capabilities to collect evidence in order to prosecute terrorists and discover their networks,” he added. “This is really important and, in fact, crucial for our participants to know that in their countries or regions, there are FBI agents who can help them.”

“They do work internationally, and they have met up with alumni in many of the places they have gone to work like Kenya, Ukraine, Pakistan and Yemen,” Howcroft said. “They are really living this idea of the value of the alumni network here at the Marshall Center.”

Note: In the above DoD photo by Christine June Special Agents Tom and Jean O’Connor, both with the FBI’s Joint Terrorism Task Force in Washington, talk about evidence and prosecution to 68 security professionals from 44 countries attending the Program on Terrorism and Security Studies at the George C. Marshall European Center for Security Studies in Garmish-Partenkirchen, Germany on  July 9, 2018.
Posted by Paul Davis at 3:51 AM